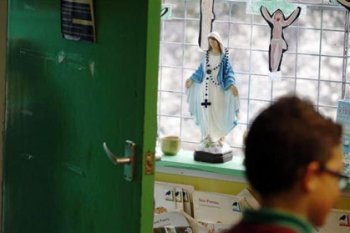 The United Nations Committee on Economic, Social and Cultural Rights (CESCR) has called on Ireland to "increase the number of non-denominational schools" in its education system.

CESCR has urged Ireland to "review admissions policies of all schools with a view to removing all discriminatory criteria for enrolment and establish a regulatory mechanism to monitor school policies, including admissions policies".

The highly critical report recommended that Ireland "step up its efforts" to make education "inclusive".

Responding to the latest critical UN report, Atheist Ireland, which promotes "atheism, reason and an ethical, secular state", commented: "Both major UN Human Rights Committees have now condemned Ireland's lack of separation of church and state in education and other laws. Last year it was the Committee on Civil and Political Rights, and this year it is the Committee on Economic, Social and Cultural Rights."

"Atheist Ireland has now succeeded in getting four UN Committees to call for secular education in Ireland. These are the Committees on Civil and Political Rights, ESC Rights, the Rights of the Child, and Racial Discrimination."

In April 2015, Educate Together, an NGO which runs inclusive, multi-denominational schools in Ireland, said that control of education by religious bodies had reached "shocking" levels. 97% of the Irish primary school system is run by religious denominations.

"There are still large areas of the country where parents have no alternative but to send their children to denominational schools", their CEO Paul Rowe said.

National Secular Society campaigns manager Stephen Evans commented: "Ireland has extraordinary levels of religious control over primary education in particular. Religious influence or control of state education should be a thing of the past, not a prospect for the future. Clearly the educational offering in Ireland needs to change – and likewise in the UK, where faith-based, taxpayer funded education is equally inappropriate and undesirable.

The CESCR report was also scathing about Ireland's "highly restrictive legislation on abortion" and the "strict interpretation" of the legislation. The committee were "particularly concerned at the criminalization of abortion, including in the cases of rape and incest and of risk to the health of a pregnant woman."

CESCR called on the Irish Government to hold a referendum on abortion and to "revise its legislation."