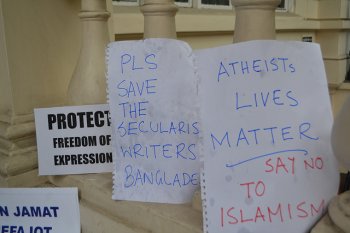 Secular human rights organisations have called on the United Nations Human Rights Council to promote "genuine respect for freedom of religion and belief and freedom of expression".

At the 29th session of the United Nations Human Rights Council (UNHRC) in Geneva, Roy Brown, representing the Centre for Inquiry, called for action to combat persecution, oppression and discrimination against non-believers.

Mr Brown drew specific attention to murder of bloggers in Bangladesh, the arrest and lashing of Raif Badawi and others in Saudi Arabia and the imprisonment of freethinkers in Egypt.

Mr Brown challenged Saudi Arabia, which has a seat on the Human Rights Council, over its "fear of atheism and freethought".

"Saudi Arabia has equated atheism with terrorism, but it isn't atheist jihadis who are terrorising the world", he said.

Mr Brown told the Council: "atheists and freethinkers do not advocate state atheism but government that is neutral towards religion and belief, favouring none and discriminating against none."

In a separate intervention, Kacem El Ghazzali of the International Humanist and Ethical Union (IHEU), accused the Egyptian state of being party to "a war on atheism".

He called on the UNHRC to "condemn the use of hate speech and incitement against any religious or belief minority" and urged Egypt to implement the Rabat Plan of Action – which seeks to prevent incitement to discrimination, hostility and violence whilst protecting free speech.

In another IHEU intervention, Elizabeth O'Casey called on the UN to do more to protect the rights of LGBT people and challenge laws restricting their free expression.

Meanwhile, a new report into the imprisonment of people for their religion or belief was launched in the House of Lords this week at meeting of the All Party Parliamentary Group (APPG) on Freedom of Religion and Belief, attended by the National Secular Society.

The report – "In Prison for their religion or beliefs" – was published by Human Rights Without Frontiers International (HRWF) and details country by country a list prisoners who have been incarcerated for manifesting their beliefs or falling foul of so-called anti-blasphemy laws.

The report is available here.