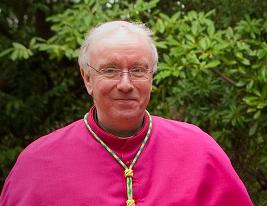 The Bishop of Portsmouth has urged Catholics to be 'vociferous' when taking part in the "democratic process".

According to the Tablet, Bishop Philip Egan described a "chasm" between modern society and the doctrines of the Catholic Church, particularly on social issues.

To bridge this gap, the Bishop said Catholics have a "critical duty" to "participate vociferously in the democratic process" to contribute the Church's "distinctive, saving message".

He added that what makes Britain great is faithfulness to "Christian patrimony", a claim he has made before.

"Sometimes people envisage British values as 'decency', the NHS, red pillar-boxes or warm beer. No! What makes Britain great is fidelity to our Christian patrimony, a concern for justice, freedom and the rule of law, values derived from love of God and neighbour, fused with our native genius," the Bishop said.

The Tablet reports that the Bishop argued politics was about founding a society on the values of Catholic social doctrine.

Recent research found that 49% of Britons, by far the largest group, have no religion. Unlike the Church of England, the Catholic Church has decreased as a percentage share of the population relatively slowly; 8% of Britons said they were Catholic in 2014, compared with 10% in 1983. The National Centre for Social Research attributes this slower decline to immigration.

Meanwhile, the Pope's 'draft' encyclical on climate change, leaked before it was due for publication, has called for "changes in lifestyle and changes in methods of production and consumption to combat ... warming".

Responding to the leaked draft of the papal encyclical, in which Pope Francis warns that the world is heading for "unprecedented destruction" unless mankind confronts climate change and reforms the way it treats the planet, Keith Porteous Wood, executive director of the National Secular Society, said:

"The Pope's well-intentioned words fall rather flat when taken in conjunction with Catholic dogmas that undermine so much of what he hopes for. The ban on contraception contributes to unsustainable overpopulation, more disease and large families among people least able to sustain them. The greatest contribution that the Pope could make to the welfare of the planet is to get his Church to reverse the ban on contraception, and to stop it using its privileged position at the United Nations to obstruct aid initiatives that include contraception."