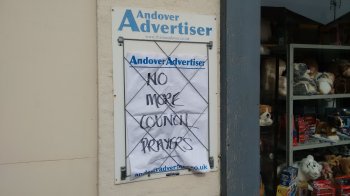 Whitchurch Town Council has voted to abolish the practice of saying prayers at its meetings, just weeks after the previous Government passed legislation enabling councils to include religious observances as part of their official meetings.

A proposal to replace prayers with a 'period of reflection' was rejected by a majority of councillors, meaning no religious observances whatsoever will now take place at council meetings.

Councillor Steven Neilson, who said he felt "intimidated" by prayers, paid tribute to his "Christian friends and colleagues" for their positive reaction to his proposal that prayers be excluded from town hall meetings.

Cllr Neilson said: "Council meetings should be conducted in a manner equally welcoming to all councillors, regardless of their individual religious beliefs or lack of belief. A common theme from our discussions on council is that we must avoid imposing our personal religious beliefs on others".

The decision is another blow for Eric Pickles who last week lost his job as Secretary of State for Communities and Local Government. One of his final acts as Communities Secretary was to issue a statement declaring the Local Government (Religious Observances) Act as a victory for "freedom to worship over intolerant and aggressive secularism" and for "long-standing British liberties over modern-day political correctness".

Mr Evans commented: "Although we were disappointed to see legislation to re-establish council prayers pass into law with so little scrutiny, we fully expect other councils to realise that local authority meetings are not an appropriate setting for religious worship. Religious freedom is important, but a secular approach to these matters is necessary to ensure that an individuals' right to worship is always balanced by others' rights to worship in other ways, or live their lives free from religion if they so choose".

Last week the NSS welcomes Mr Pickles' departure from Cabinet, and criticised his legacy of using his ministerial office to promote a religious agenda.

Meanwhile, a Council in Northern Ireland was recently left bitterly split after an hour-long debate about having prayers at the start of meetings. Sinn Féin Councillor Cara McShane said she believed that politics and religion were 'separate' and told council colleagues "I don't come here to pray."

*Update* an earlier version of this story incorrectly stated that Sinn Féin Councillor Cara McShane was an SDLP councillor.