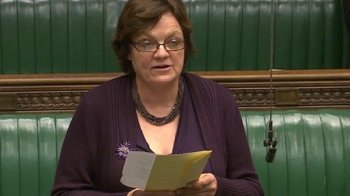 The Labour MP for Slough has hit out against voter intimidation, after some Muslim voters were told that they were not 'true Muslims' unless they voted against her.

The row centres over a local campaign- with apparent support across religious groups- for a blasphemy law. During the General Election campaign newly re-elected MP Fiona Mactaggart apparently resisted calls for the draconian measure, and when the result was announced she issued a stark warning about "spiritual coercion in one community"- in an apparent reference to Muslims in Slough.

Ms Mactaggart said voters had been intimidated and that she wouldn't 'build bridges' with those behind the smears. "I don't see how you can build a bridge with someone who says 'you aren't a proper Muslim if you vote for Fiona'," she said.

"There has been an element of spiritual coercion in one community which I profoundly regret. I think it was an attempt to divide Slough and its community which is dangerous. It is religious intimidation.

"Slough has always been at its best when it is united and they wanted to divide us. It is really sad and it is a dangerous thing to do."

Her defeated Conservative Party rival, Gurcharan Singh, said: "The truth is that Fiona refused to listen to the concerns of Slough's Muslim community and the Pakistan Welfare Association about the need for action to provide a legal channel to respond to those blaspheming against their religion."

Worryingly, Mr Singh said the local campaign for a blasphemy law "resonated with Sikhs and Hindus too."

Stephen Evans of the National Secular Society said: "The recent election campaign saw numerous attempts to exert religious or spiritual influence over voters. There may well be problems with how the law deals with this kind of action by religious groups and leaders, as some argue. Either way, it is an extremely troubling development. We do not want to see sectarian politics emerging in this country.

"As for Mr Singh- it is deeply concerning to hear a parliamentary candidate supporting a campaign for a blasphemy law. Inter-faith support for such a regressive measure is nothing to be proud of."