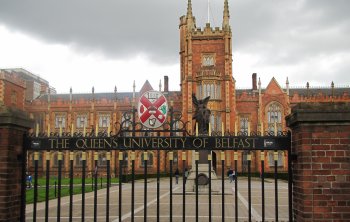 Queen's University Belfast has cancelled an event on the fallout from the attack on Charlie Hebdo, citing fears over the university's "reputation" and "security" if the talk went ahead.

Vice Chancellor Patrick Johnston has been widely criticised for cancelling the event, in the latest capitulation to fear over Islamist blasphemy laws.

Dr. Brian Klug, who was due to attend the event, said he was "dismayed" by the Vice Chancellor's decision.

He commented: "The faculty members who took the initiative to convene the conference set an excellent example of how academia should respond to complex conflicts in the public sphere. They deserve to be fully supported by their university -- not to have the rug pulled out from under their feet."

The event was to be called "Understanding Charlie: New perspectives on contemporary citizenship after Charlie Hebdo". The university is refusing to make any comment, except to confirm that the symposium has been cancelled.

Stephen Evans, campaigns manager for the National Secular Society, said the case was "another example of fear- real or imagined- shutting down debate, discussion and normal academic freedom.

"Patrick Johnston is just the latest to capitulate in the extraordinary climate that exists today. Free speech must be defended every day, or else it shall continue to be eroded. Blasphemy laws must never be reintroduced, whether by legislation or through threats of violence.

"The answer to 'security concerns' is not to cancel every event which might upset Islamists, but to provide security. Free speech must be defended, not hidden away in case it upsets someone.

"It is shameful that the university's 'reputation' was deemed to be more important than protecting academic freedom."

Jodie Ginsberg, Chief Executive of the Index on Censorship said: "If all public discussion on important issues is shut down because of security fears then the terrorists have won. Free speech - including the free exchange of ideas - is vital for democracy and universities in particular should be the torch bearers for free expression."

This cancellation is the latest in a series of events closed down by universities over fears about a backlash from Islamists. Activist Maryam Namazie was recently forced to give up plans to speak about apostasy at Trinity College, over fears her talk might 'antagonise' Muslim students.

Queen's University Belfast has said it will review its decision to cancel the symposium. The University has commissioned a risk assessment to be completed by Friday 1 May 2015. Organizers of the event had previously suggested that a risk assessment had been carried out and "every precaution had been taken".