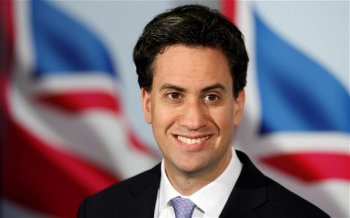 The National Secular Society has called on Labour leader Ed Miliband to clarify recent comments he made during an election visit to an evangelical church.

Speaking on Sunday 19th April at Praise House, a church in Croydon, the Labour leader said he would "look at" religious freedom after he was asked about recent cases involving Christians expressing their beliefs in the workplace. He replied that "the articulation of people's Christian faith is a thing that they should be, absolutely, allowed to do."

He said that "religious freedom is incredibly important and that's something we prize in our country."

"We must do everything we can to make sure that that religious freedom is protected and I am very clear about that."

"So absolutely we should look at how we protect the freedom of expression that people have, I think it is an important part of religious freedom both here and around the world."

However, The National Secular Society has called upon the Labour leader to clarify his comments and acknowledge that everybody's rights have to be balanced fairly.

Stephen Evans, National Secular Society campaigns manager, said: "Both the UK and European courts have achieved a remarkably good balance in allowing people to manifest their beliefs, but not to the extent that they impinge unfairly on the rights of others. It's therefore important to know what additional measures Mr Miliband feels may be necessary to protect religious freedom.

"Religious and other beliefs should be accommodated as far as is possible and reasonable. But there are clearly cases where employees cannot be absolutely free to manifest their beliefs, particularly when it results in them refusing to provide services to people on the basis of that belief.

"There is widespread persecution of Christians in the Middle East and North Africa where freedom of religion is non-existent, and it is wrong to compare that with the few Christians in the UK who feel discriminated against because they are not permitted to express homophobic views at work."

Recent high profile court cases include Ladele and McFarlane. In both cases the claimants objected on religious grounds to dealing with same sex couples in the same way they would with opposite sex couples. The European Court of Human Rights rejected their claims that UK law did not sufficiently protect their rights to freedom of religion.

A recent consultation by the Equality and Human Rights Commission found that some evangelical Christians believed that Christianity had "lost status" because of equality laws.

The EHRC also found that some "wanted to be able to discriminate on the basis of their religion in employment (for example, when recruiting new staff) and when providing goods, services and facilities."

Mr Miliband said he had seen hostility towards religious groups running community projects when he was a Cabinet Minister in the Labour Government. He commented that faith groups have got to be taken at "face value" when they offer to provide services.

"We've got to take people at face value, if you like, and say what is it you are trying to do and can you achieve change for the community, can you make a difference and if you can you should be able to do it?"

"We shouldn't worry about people's motivations in how they want to do that."

Stephen Evans commented: "People should be entitled to fair, just and non-discriminatory public services. While many faith groups do important work within the community, it's naïve to take them all at face value. Where public money is provided to religious groups to deliver public services, all contracts should contain clear equality, non-discrimination and non-proselytising clauses".

"And at a time when schools are being exploited by evangelical groups as part of their missionary work, there are very valid reasons for being concerned about the motivations of religious groups seeking to be involved in young people's education", he added.