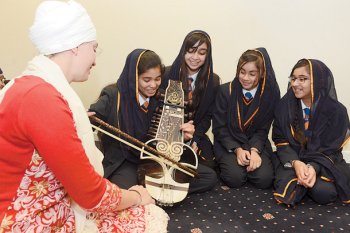 The National Secular Society is supporting parents unhappy about their children being allocated a Sikh ethos free school by the local authority against their wishes.

Over two-thirds of the new intake at a Sikh ethos free school in Leeds will be pupils whose parents did not choose the school. Of the thirty children allocated places at the Sikh ethos school, just eight had put the Sikh school down as a preference.

Last year the National Secular Society criticised the Department for Education for backing the Khalsa Science Academy despite a clear lack of demand for a faith-based school in the area.

Martin Wheatley, whose 5 year old daughter has been allocated a place at the school told the NSS: "We strongly believe in education being secular and not based on any one faith – and we expressly stated in our original application that we wanted a non-religiously affiliated education for our daughter.

"Our nearest catchment school is a Church of England school, so we opted for the nearest non-religious school which is only an additional 50 metres further from our home.

"Last week to our dismay we discovered we had not only missed out on all our choices but that the local authority were claiming that the nearest school we could be sent to was the Khalsa Science Academy over four times the distance away from where we live."

Mr Wheatley, who plans to appeal the decision, said his family had found the whole experience "deeply upsetting and more than a little worrying".

Arin Saha, another parent whose child has been assigned to the Khalsa Science Academy told the Yorkshire Evening Post: "We are not a Sikh family. In the same way that we would not want our son educated in any school that is guided by a particular faith-based ideal, we do not feel that the religious ethos encouraged at this school is compatible with our own faiths, beliefs and philosophical ideas."

Mr Saha also said he was concerned about the dietary restrictions imposed by the school, which has said packed lunches must be vegetarian, as the school is sited on the grounds of a Sikh temple.

He added: "We do not wish to sound melodramatic but we do find it a little offensive that we would be told what we could and couldn't feed out children based upon the school that Leeds City Council has allocated us."

Stephen Evans, National Secular Society campaigns manager, said: "It's scandalous, and frankly embarrassing, that in modern Britain parents aren't able to secure a state education without a religious ethos being imposed upon their children.

"Rather than wasting public money on unwanted faith-based free schools the Government should be ensuring that where schools places are needed, they're created in inclusive and religiously neutral schools that don't seek to push religion on pupils at every possible opportunity.

"What's absolutely clear is that parents shouldn't be left with no option other than to send their children to a faith school of a religion they don't believe in."

In March 2015, Christian parents voiced their concern when their daughter was allocated a place at the Khalsa Secondary Academy in Stoke Poges, in South Buckinghamshire. Though the family are religious, they did not want their child to attend a faith school of any kind.

The NSS understands that as many as 24 parents in South Buckinghamshire have been offered school places at KSA without their requesting it.