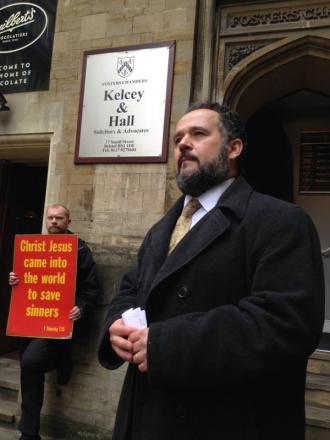 Street preacher Michael Overd has been found guilty of using "threatening" or "abusive" words after making homophobic remarks during a sermon delivered in Taunton High Street.

Overd was ordered to pay £250 to a passer-by who had been offended by the preacher's comments, and he initially refused, at which point judge Shamim Qureshi threatened the preacher with a prison sentence. He has been ordered to pay total costs of £1200.

Overd intends to appeal his conviction and said "I follow my Lord and leader, so I won't tone down."

The street preacher was charged with a public order offence, after complaints were made by members of the public that he had made homophobic and 'Islamophobic' remarks.

The sermons were delivered in June and July of 2014.

The BBC reports that the judge "told the preacher he seemed to enjoy testing the laws on free speech to their limits."

Mr Overd was also told "that he should not have quoted from Leviticus 20:13 when speaking about homosexuality," according to Christian Today, who also report that "the judge suggested that there were other verses he could have chosen if he wanted to talk about what the Bible says about homosexuality."

Judge Qureshi also works as a 'judge' for the Muslim Arbitration Tribunal, which aims to help Muslims "resolve disputes in accordance with Islamic Sacred Law."

In an interview with Premier Christian Radio, Overd said that Britain no longer "recognises the Bible" and said that his conviction "sadly" represented where the UK was "concerning sodomy and lesbianism."

He railed against "liars, thieves, drunkards, fornicators" and said that "Jesus offended people" and that Jesus was a "very offensive man."

Overd said "we're all sinners, that's what the Bible says. I am as well." He added that "God says" Muslims and homosexuals were "hell-bound" because they "denied the truth of the Bible" for breaking the commandments of God.

The preacher said he was "proclaiming the truth of the Gospel."

Mr. Overd was found not guilty on two other charges, which included "causing racially or religiously aggravated harassment, alarm or distress" after he made critical remarks about the Muslim Prophet Mohammed.

During the trial one witness said "I am all for free speech but not at the expense of [belittling] someone" and another said that Overd had made "defamatory comments" about the Prophet Mohammed.

The National Secular Society has previously raised concerns about the trial's implications for free speech.

Terry Sanderson, NSS president, said the ruling appeared to make the quoting of certain passages of the Bible illegal.

"Whilst we all want to encourage public civility, there is a higher principle at stake. As long as there is no incitement to violence, then people should be allowed to speak freely without fearing legal repercussions."