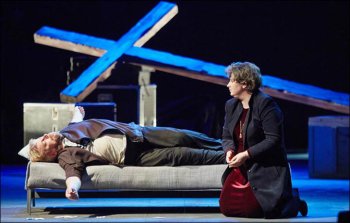 The head of the Novosibirsk State Opera and Ballet Theatre has been fired by the Russian Culture Minister over a 'blasphemous' opera, prompting further fears about free speech and religious freedom in Russia.

Boris Mezdrich staged his own interpretation of Wagner's 1845 Tannhäuser opera, which featured what is described as a "controversial" view of Jesus. Posters which promoted the opera featured an image of a crucifixion between a naked woman's legs.

The Russian Orthodox Church said the opera was a "desecration of a symbol revered by Christians."

Mezdrich has now been fired by the Culture Minister, in a move backed by President Vladimir Putin. The Culture Ministry said: "The feelings of believers have the right to respect."

The ministry warned the "deliberate mockery" of religion could result in "people's deaths, as we have seen recently", in an apparent reference to the attack on Charlie Hebdo.

A spokesman for the Russian government commented: "The state has the right to expect appropriate [performances]... that do not provoke such a sharp public reaction."

He claimed that Mezdrich's dismissal "should not be seen in any way as [an attempt] to bring in any censorship."

Mezdrich has been replaced with Vladimir Kekhman, who described the opera as blasphemous and said it had been staged by "militant atheists."

Aleksandr Kalyagin, the chairman of the Union of Theatre Workers of Russia, has said the sacking was even more severe than some of the repression against artists under the USSR.

Kalyagin said: "even in Soviet times there was a procedure known as the last warning from the party" before artists were fired.

A court case against the production was dismissed on 10 March. After the case was thrown out, activists associated with the Russian Orthodox Church began campaigning for Mezdrich to lose his job.

The New York Times reports that "President Vladimir Putin has made the protection of 'traditional values,' including religious values, a pillar of his third term. In this case, Mr. Putin made his opinion known on March 23 when he awarded a state medal for 'service to the homeland' to Aleksandr Novopashin, a priest in the Novosibirsk diocese who helped to lead the campaign against 'Tannhauser.'"

In 2013 the Russian Duma passed a blasphemy law which made it a criminal offense to offend "religious feelings". Blasphemy is punishable in Russia by a jail sentence of up to three years.