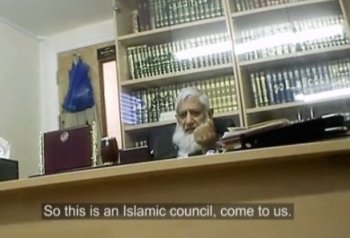 The National Secular Society has welcomed an announcement from Home Secretary Theresa May that a future Conservative government would launch a review into so-called 'sharia courts' operating in the UK.

The Home Secretary said that there was evidence of women being left destitute after being 'divorced' under Islamic law without the legal protections offered by being in a legally-recognised marriage and warned of "wives who are forced to return to abusive relationships because sharia councils say a husband has a right to chastise" them.

Mrs May noted that sharia councils gave the testimony of a woman "only half the weight" of that of a man.

She added that on sharia law the UK "knows enough to know we have a problem" but that we could not yet gauge the full extent of the issue.

The Home Secretary set out plans to commission an independent figure to "lead an investigation into the application of sharia law" in Britain.

The plan was welcomed by the National Secular Society which has warned against the advancement of 'sharia courts' and religious tribunals in Britain.

NSS campaigns manager Stephen Evans said: "We have long argued that the state needs to better tackle the numerous problems caused by sharia being used as a basis for alternative dispute resolution.

"Many vulnerable people are left unaware of their rights and without access to the justice system. They are left with the impression that sharia courts actually have authority – which they do not.

"Sharia is discriminatory against women, and it is women who disproportionately bear the brunt of regressive rulings issued by these religious councils. Without recourse to outside support services, many women become trapped in insular religious communities without access to outside help – undermining both their legal and political equality."

However, despite welcoming the Home Secretary's plans, Mr Evans said that the Government's massive increase in court fees and reduction of the legal aid budget had played into the hands of those advocating Sharia alternatives.

In December 2014, AURAT, a charity which helps victims of honour-based domestic violence, published a report on sharia marriages in the UK which highlighted the stories of women who had faced serious discrimination and poverty as a result of Islamic 'marriages' being ended by their husbands.

The NSS warned of the dangers posed to women by Nikah Islamic marriages, which have no legal force, and which leave women seriously disadvantaged and without the legal protections that come with legally-recognised marriages. Women reported being left without rights to the family home and property, and with "no recourse" to compensation after husbands, many of whom had other 'wives', left them.

The NSS has been supporting the Arbitration and Mediation Services (Equality) Bill, sponsored by cross-bench Baroness Cox, which would make arbitration services in the UK subject to equality laws and make it a criminal offence for a sharia tribunal to claim to have legal jurisdiction over criminal or family law.

Commenting on the problems raised by sharia tribunals, Baroness Cox said in 2014: "I went to a divorce hearing … in a sharia court in the East End of London. The room was arranged just like a courtroom, with three men sitting up behind a bench looking down on us. The woman in question was intimidated into silence because, as she told me later, she believed it was a proper constituted court."

The Bill was introduced in 2011 and had a successful second reading debate in the House of Lords, and has been re-introduced this term but will fall when Parliament is prorogued for the General Election.

Theresa May's proposal to review 'sharia courts' came in a wide-ranging speech unveiling a package of comprehensive measures to tackle Islamic extremism. She urged UK Muslims to help in the struggle against jihadist ideology and compared the struggle against extremism to that undertaken against racism.

The Home Secretary called for a strong civil society response to extremism, and set out proposals to prevent future governments from "unwittingly" lending legitimacy to extremist organisations. She warned of "entryist tactics" used by extremists.

She also criticised "self-appointed and unrepresentative community leaders" and said that the Government should engage with people "directly" and through elected representatives, rather than through self-appointed leadership figures.