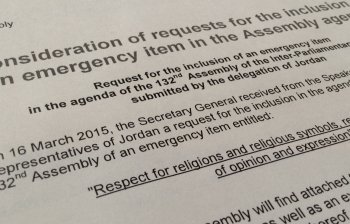 Jordan has introduced an emergency item to the next meeting of the Inter-Parliamentary Union, calling for a ban on insulting religion or religious symbols.

The draft resolution says insults to religion represent a "danger to all humanity."

The Speaker of Jordan's House of Representatives has written to the Secretary General of the Inter-Parliamentary Union (IPU) to introduce an emergency item titled "respect for religions and religious symbols, respect for freedom of opinion and expression."

Although the title feigns acknowledgment freedom of opinion and expression, the resolution does nothing of the kind.

The IPU is the international organization of parliaments and describes itself as "the focal point for world-wide parliamentary dialogue" and "works for peace and co-operation among peoples and for the firm establishment of representative democracy."

The draft resolution argues insulting religion feeds "religious extremism and fanaticism, terrorism and violence" and says that a way to "remedy the problem" is to "promote mutual respect among believers".

The memorandum says: "Insults to religions and religious symbols are uncivilized actions that have very serious consequences on all humanity, as they prevent the meeting of minds and dialogue and feed religious extremism and fanaticism, terrorism and violence.

"The followers of Islam acknowledge the existence of other religions. Islam also gives the followers of those religions the right to exercise their religious practices freely within Islamic States, and regards non-Muslims as citizens and an integral thread in the fabric of the nation.

"Freedom of opinion and expression should not be used as a pretext for insulting others' lives, reputations, religions, holy shrines or practices. In today's world, the term 'religious symbols' refers to prophets, places of worship and holy books. As a gesture of commitment, the religion of Islam obliges all its followers to believe in and respect all prophets, and to believe in holy books."

The Speaker has also called for an "international convention to prevent disrespect for religions and religious symbols."

Stephen Evans, National Secular Society campaigns manager, said the resolution was the latest in a long line of attempts to impose a global blasphemy law and called for it to be "fiercely resisted".

Free speech campaign organisation Article 19 have denounced the proposal and warned that it would "legitimise criminal prohibitions on religious insult or so-called 'defamation of religions'" and warned that the introduction of prohibitions on insulting religion must be resisted in other international forums, after campaign groups saw recent success in seeing off attempts to introduce de facto blasphemy bans at the UN.

A woman in Afghanistan was recently beaten to death by a mob in central Kabul, after she was accused of burning a copy of the Koran. A large crowd cheered while men kicked her on the ground and pelted her with rocks. Her body was then set on fire and thrown into a river.

The NSS has recently warned of attempts by groups in the UK to introduce blasphemy norms. The Muslim Action Forum, which protested outside Downing Street with a banner reading "be careful with Mohammed", claims to have launched a "legal strategy" in the UK to stop publication of insults to Mohammed to and to promote what they call "global civility."