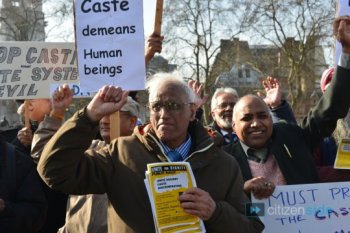 The Government has been criticised for not taking action to tackle caste-based discrimination after a long campaign by anti-caste campaigners to have it specifically recognised under anti-discrimination laws.

Baroness Garden of Frognal has written to NSS honorary associate Lord Avebury, stating that the Government "have no plans to launch the consultation imminently, since it would not be appropriate to run public consultation of this sort in the period immediately before an Election."

In 2013 the Government undertook to "carry out a full public consultation on the prospective legislation in early 2014." Shortly after this guarantee, Lord Avebury warned that the Government was intentionally dragging out the process of dealing with caste-based discrimination until the General Election.

Now, Baroness Garden writes that "there is now no longer sufficient time in the current Parliament for public consultation of the appropriate length for this complex and controversial issue to be carried out."

Peers were highly critical of the Government's handling of caste discrimination in February, and NSS honorary associate Lord Cashman described the Government's "procrastination" as "entirely unacceptable".

Research suggests that as many as 200,000 people in the UK may be affected by caste based discrimination.

Baroness Garden wrote that the Government has "always slated that we completely oppose caste discrimination and in that context we note that the judgment opens the possibility of legal remedy for claims of caste-associated discrimination under existing legislation".

The National Secular Society has argued that this remedy is at best partial, and that the Government has an obligation to enact secondary legislation tackling caste directly.

Keith Porteous Wood, NSS executive director, said: "The government has been directed to introduce anti-discrimination legislation by parliament and the UN. For it to defy both can only be explained by conflict with a strong vested interest.

"Victims of caste discrimination deserve much better and will rightly feel betrayed by the Government's failure to meet its obligations."

He added that the NSS would continue to lobby the new Government after May's General Election to ensure it takes the appropriate action.