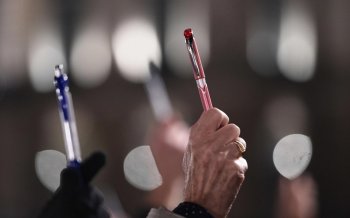 The National Secular Society has awarded Charlie Hebdo the annual Secularist of the Year prize, for its courageous response to the terror attack on its Paris office.

Just one week after the attack on 7 January 2015, in which 12 people were killed, the remaining staff of Charlie Hebdo published an edition of the magazine featuring a depiction of Mohammed and an editorial making a passionate defence of secularism and the right to free expression.

NSS president Terry Sanderson said: "Since the events of 7 January in Paris, Charlie Hebdo has become more than a magazine – it has become an ideal, a symbol of democracy, a rallying cry to those who value freedom and openness in public debate.

"The Charlie Hebdo horror has now joined the endless stream of other outrages committed in the name of Islam. The difference is that it prompted a commitment to free speech and secularism on the part of millions of people.

"Ridiculous it may be, but it is also lethal.

"From the forty or so nominations that we received, there was one that could not be ignored, that was the obvious and only possible winner."

The award was presented at the annual Secularist of the Year event, hosted by the NSS at a lunch event in central London. The lunch was attended by members, supporters and honorary associates of the National Secular Society, including Professors Richard Dawkins and AC Grayling. Also present were a number of progressive Muslim campaigners and representatives of organisations working to combat Islamic extremism.

Martin Rowson, the Guardian cartoonist, accepted the award on behalf of the staff of Charlie Hebdo.

Charlie Hebdo said it would donate the £5000 prize money for the award to the fund supporting the families of the murdered cartoonists.

In addition to the main Secularist of the Year award, the NSS also acknowledged a number of others for their work in the past year.

Lord Avebury was recognised with a special award for his invaluable support of the NSS, and for being a tireless advocate for secularism. He recently tabled a Bill to abolish chancel repair liability and has spoken out in Parliament against collective worship in schools and new legislation allowing prayers to be held as part of council meetings. The Lib Dem peer was also instrumental in the successful campaign to repeal the British blasphemy laws in 2008.

Maajid Nawaz, who couldn't attend the event, was recognised for his work at Quilliam, countering Islamic extremism and promoting secularism.

Helen Bailey and Elaine Hession were acknowledged for their efforts in helping the National Secular Society campaign to abolish chancel repair liability.

Tags: Freedom of Expression, Secularist of the Year