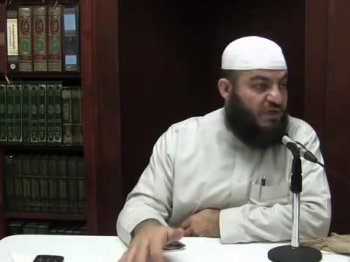 Sheikh Haitham al-Haddad, who once said "godless homosexuals" engaged in a "criminal act", is to be hosted by the University of Westminster Islamic Society.

Al-Haddad will give a talk titled "who is Muhammad". The event is being held on Thursday 26 February, shortly before the University hosts a weekend of events to celebrate the National Student Pride Festival.

The Sheikh has a long history of articulating an extremely homophobic ideology. In an online article called "Standing up against homosexuality and LGBTs" he compared homosexuality with adultery, and said "Allah has ordained us to speak out" in order to "combat the scourge of homosexuality". He argued that homosexuality was a "criminal act".

He also used the article to praise the president of Liberia for "defending a law that criminalises homosexual acts" and commended "the many Christian bishops and ministers" who opposed equal marriage. He called on Christians "to refer back to the original teachings revealed by their creator, Allah" and said he prayed to Allah "to preserve this country from evil practices" and to "keep us steadfast in enjoining good and forbidding evil".

Al-Haddad has also been recorded discussing the "proper way" to conduct female genital mutilation, and said that domestic abuse should be sorted out between a husband and wife, because Islam "is looking for the bigger picture in order to keep the relationship between the husband and wife together."

Sheikh al-Haddad serves as a 'judge' for the Islamic Sharia Council based in East London, and describes himself as a specialist in "many of the Islamic sciences". Al-Haddad also boasts of studying under the late Grand Mufti of Saudi Arabia and is said to provide "complex theories which address the role of Islamic jurisprudence within a western environment". He wrote his doctoral thesis on "Islamic jurisprudence concerning Muslim minorities."

A petition to stop al-Haddad from speaking on the university campus has already drawn well over 2000 signatures. The petition describes al-Haddad as a "controversial and homophobic speaker" and criticises the fact that the talk is to take place shortly before National Student Pride.

The University of Westminster said that they were "committed to maintaining freedom of speech and a diversity of views as set out in the Education Act 1986" but that "respect and tolerance" were their foremost concerns. The University says they will be "monitoring the event carefully".

National Secular Society campaigns manager, Stephen Evans, said: "Free speech extends up to the point of incitement, and judging by al-Haddad's previous comments, he is walking an extremely fine line.

"There's no doubt that the influence of political Islam in British universities is growing and with Islamic societies frequently hosting extremist preachers, universities need to be mindful of the effect that such speakers are having on young British Muslims.

"But the best response to their poisonous narrative is open discussion and debate, where it can be systematically exposed, ridiculed and defeated."

UPDATE 26/2/14: Westminster University has today 'postponed' the event following the revelation that the 'Jihadi John' figure who appears as a masked executioner in Islamic State propaganda videos is Londoner Mohammed Emwazi, 27, a former student at the University of Westminster.