Secularists stand up for LGBT equality in Northern Ireland 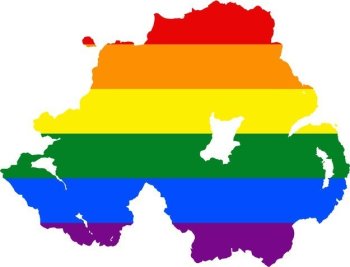 The NSS has objected to proposed changes to Northern Ireland's equality laws which would allow businesses to refuse services to LGBT customers on the grounds of "strongly held religious convictions". The goods and services discrimination protection provisions in the Equality Act 2010 do not apply to Northern Ireland.

Responding to a consultation on the Northern Ireland Freedom of Conscience Amendment Bill, proposed by Democratic Unionist Party backbencher Paul Givan MLA, the NSS warned that proposed changes could lead to widespread discrimination against LGBT citizens without advancing protection for religion or belief.

The Bill proposed to amend the Equality Act (Sexual Orientation) Regulations (Northern Ireland) 2006 "to ensure that individuals are not put in a position where as a result of this legislation they are forced to choose between either acting in violation of their faith conscience, by affirming same-sex relationships, or losing their livelihood".

The Bill was prompted by a discrimination case against Ashers Baking Company, which refused to bake a cake with a message endorsing same-sex marriage. Gareth Lee had ordered the cake to mark International Day Against Homophobia and Transphobia. The Equality Commission (Northern Ireland) took legal action, arguing that the bakery had discriminated against the customer on the grounds of his sexual orientation.

Although the legal action is still ongoing, and will not reach court until March, Paul Givan argues that the case "highlighted the fact that some equality legislation, passed with the intention of protecting minorities, is having an adverse effect on those with religious belief when it comes to the provision of goods and services."

Mr Givan asserts that providing goods or services that could in some cases in "some sense" facilitate same-sex relationships and thus make a commercial service provider "complicit in affirming same-sex sexual relationships".

The NSS pointed out that when a business provides goods or services to a customer the relationship is commercial not personal and so it is not affirming any aspect of the customer's identity or characteristics.

The consultation document asserted that the draft Bill would not permit for example "an Evangelical grocer … to refuse to sell apples to a gay man". However, legal advice provided to the NSS by an eminent academic lawyer opined that the proposed legislation is so widely drafted that it could be used to justify discrimination in any service.

The relevant part of the advice reads: "The courts have allowed individuals to determine for themselves what their faith requires. If the printer knows that the cabinet maker will use profits from the sale of the cabinets to pay for a romantic weekend away with her partner or to pay for their wedding, he may conclude that printing the brochures does involve facilitating sinful conduct. The courts generally do not second guess individuals' assessments of what their faith required (e.g. the court accepted that Ms. Eweida felt she was required to wear the cross even though most Christians do not see it as a requirement) therefore it is not certain that the exemption can be restricted as the [consultation claims]."

The Rainbow Project, a Belfast based charity which promotes the health and well-being of LGBT people and their families in Northern Ireland, have been campaigning against the proposed bill and share these concerns. They wrote "it appears that Mr Givan and the other authors have not given any credence to the exceptionally wide remit this proposal may grant." They also pointed out a range of ways the proposal could impact negatively on LGB people's lives – beyond the aims the consultation claims the Bill seeks to allow.

In a statement on their website John O'Doherty director of the Rainbow Project said "The fact that this proposed legislation will only be used to discriminate against LGB people shows that it is not motivated by a desire to protect those of religious belief but by a hostility to LGB people and their hard-won rights. This is just updating 'No dogs, No blacks, No Irish' to include 'No gays."

The Bill would allow Catholic adoption agencies in Northern Ireland to discriminate in the choice of adoptive parents on grounds of religious conscience, we believe in conflict with a recent High Court judgement. More importantly, as the NSS has pointed out, this would reduce the pool of prospective parents, which would not be in the best interests of the children concerned.

The consultation will close at 5pm on Friday 27 February and the DUP First Minister Peter Robinson has indicated that the party will back Mr Givan's Bill. Sinn Fein have indicated they would seek to block the Bill in the Assembly. A party spokesperson told the Belfast Telegraph it was "opposed to any dilution of equality legislation".

Keith Porteous Wood, executive director of the National Secular Society, said "As currently worded, the Bill will enable discrimination way beyond the limited examples given by its proposers. It would legitimise discrimination already suffered by homosexuals making them second class citizens, for example by making lawful 'no gays' signs outside commercial premises. Investors and tourists are increasingly deterred by intolerance the message this legislation would send out loud and clear. The NI Assembly risks severe reputational and financial consequences if it licenses bigotry in this way."