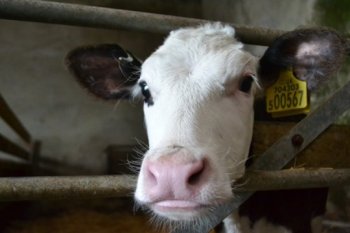 MPs have debated ending non-stun slaughter, after a petition to end the religious exemption to animal welfare laws was signed by over 115,000 people.

The Westminster Hall debate on Monday 23 February was led by Conservative MP Phillip Hollobone, and was triggered by a petition backed by a range of organisations, including the National Secular Society. Mr Hollobone began by noting the very high levels of public support for ending non-stun slaughter. He also suggested better labelling of meat products, and called for a system where meat was labelled as stun or non-stun, and where packaging specified if meat was halal or kosher.

However, the former Minister for the Department for Environment, Food and Rural Affairs, Sir James Paice, said that because 80% of halal meat comes from animals which are stunned first, it would "be inviting people to discriminate on religious grounds" if food was labelled as halal, rather than over concerns about animal welfare. Sir James added, "We are talking about welfare, which has nothing to do with religion".

Mr Paice said that after witnessing non-stun slaughter at a halal slaughterhouse he regarded the killing of an animal without stunning as "repugnant". He told MPs "It should be stopped" but said he accepted there are "constraints on taking that final step".

Several MPs said that the debate was not about religion; however Mr Hollobone said that the issue could not be understood "unless we tackle the religious dimension". Hollobone noted that religion was "the elephant in the room." He added that "the Muslim and Jewish communities have a lot of persuading to do if they want their point of view to win the day."

Diane Abbott said that her "local Muslim community" was concerned that the debate was not "really about animal welfare" and was "some sort of covert attack on them and their way of life." She said she was not at the debate to speak about "the technicalities or detail of the issue, but about how it is seen by communities." She called on MPs to "avoid a narrative that makes it sound as if one is trying to say that communities of faith are backward or mediaeval, or unnecessarily cruel to animals." Matthew Offord MP claimed that many people felt "under attack".

The Government's response to the petition stated that "there would be no ban on religious slaughter in the UK."

The Department for Environment, Food and Rural Affairs stated that: "The Government encourages the highest standards of welfare at slaughter and would prefer to see all animals stunned before they are slaughtered for food. However, we also respect the rights of the Jewish and Muslim communities to eat meat prepared in accordance with their religious beliefs."

A rival petition to "protect religious slaughter" has now reached over 100,000 signatures. An RSPCA-commissioned poll showed that 77% of the general public want non-stun slaughter to end.

In May 2012, the Food Standards Authority published research that indicated 3% of cattle, 10% of sheep and goats, and 4% of poultry was not pre-stunned before slaughter.

After the debate, MPs voted simply to state that they had "considered the petition".

Stephen Evans, campaigns manager for the National Secular Society, said the time had come for Parliament to act: "The scientific consensus is clear that when carried out correctly, the pre-stunning of animals prevents them suffering unnecessarily at the time of slaughter – which is why UK and European law requires it.

"Despite widespread concerns over farm animal welfare, the number of animals not being stunned before slaughter is on the rise. The time has therefore come to do the right thing and remove the exemption, and stop allowing religious considerations to compromise animal welfare."

The debate can be read here.