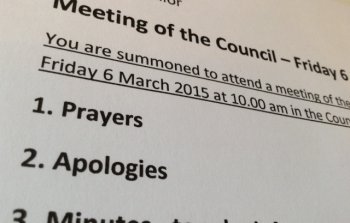 A Government backed Bill to give local councils the power to include prayers in their meetings has been branded a 'recipe for divisiveness' during a House of Lords debate.

Raising concerns during the Bill's Second reading debate, Crossbench peer Nicholas Trench, The Earl of Clancarty, said he wished to draw attention to matters of principle as well as practicalities "which we ignore at our peril".

The Earl warned that if the Bill passes, "we will have a recipe for divisiveness and storing up potential problems in the long term". He said the wisest course for councils was to be "scrupulously impartial with respect to the beliefs and non-beliefs held by the residents of a local area".

The Local Government (Religious etc. Observances) Bill is an attempt to reverse a High Court ruling that local councils had no statutory powers to summons councillors to prayers following a legal challenge by the National Secular Society and a former Bideford Town councillor.

In defending prayers as a formal part of council meetings, Communities Secretary Eric Pickles has insisted that Britain is a "a Christian country". However, the Earl of Clancarty said this was "only partly true". "We are today a multi-cultural, multi-faith country, which contains a diversity of beliefs and non-beliefs", he argued, citing a Huffington Post UK poll conducted in October last year found that more than 60% of those polled in Britain were "not religious at all".

The crossbench peer said "Institutionalising a particular religion within the formal business of a council meeting or identifying the council with a belief, or even a range of beliefs, must in the modern age be insensitive and crosses what many people would think is today's acceptable line."

The Bill was introduced in the House of Commons by the Christian back bench MP Jake Berry, but was drafted with assistance from the Department of Communities and Local Government, led by Eric Pickles. It is being carried through he House of Lords by Lord Cormack, a committed Christian and former rector's warden at Parliament's St Margaret's parish church.

Introducing the Bill he said he was "particularly glad to see the right reverend Prelate the Bishop of Carlisle" in the Chamber, who he complimented on leading parliamentary prayers "with a particular grace and dignity". He also said it was "splendidly symbolic" that in the near empty Chamber there was a "Minister who is a Muslim and a government Whip and Minister who is a Hindu".

Lord Cormack insisted that the Bill "imposes no obligations upon anyone" despite the fact that it would enable prayers to held during the formal business of council meetings to which all councillors are summoned to attend.

No peers spoke in support of the Bill other than the Government and Labour front bench spokespeople, Lord Ahmad and Lord Kennedy, who both wished the Bill "speedy progress into law".

As in the House of Commons, the Bill progressed without a vote and will next be debated in Committee.

The debate can be read in full at Hansard