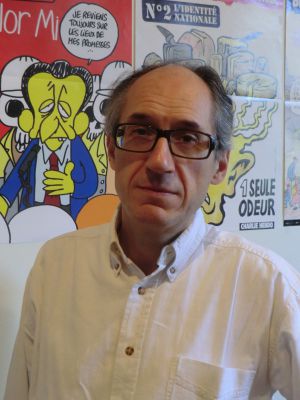 Gérard Biard, editor of Charlie Hebdo, has spoken out on the virtues of a free press and on the importance of satirising religion.

Biard was asked about comments made by Pope Francis after the Paris attacks, when the pontiff said: "To kill in the name of God is an aberration… We have the obligation to say openly, to have this liberty, but without giving offence, because it is true, one cannot react violently.

"But if … a good friend, says a bad word against my mother, then a punch awaits him. But it's normal, it's normal. Once cannot provoke, one cannot insult other people's faith, one cannot make fun of faith."

"Religion should not be a political argument. If faith, if religious arguments, step into the political arena, it becomes a totalitarian argument. Secularism protects us against this. Secularism guarantees democracy and guarantees peace. Secularism allows all believers and non-believers to live in peace and that is what we defend."

The Pope's comments after the attack on Charlie Hebdo were widely criticised. Prime Minister David Cameron said: "in a free society, there is a right to cause offence about someone's religion. I'm a Christian, if someone said something about Jesus I might find that offensive, but in a free society I don't have a right to … wreak my vengeance on them.

"We have to accept that newspapers, magazines, can publish things that are offensive to some, as long as it's within the law.

"That's what we should defend … my job is not to tell a newspaper what to publish or what not to publish, my job is to uphold the law."

Meanwhile, the Organisation of Islamic Cooperation (OIC) is planning legal action against Charlie Hebdo. The head of the OIC said that the new edition of Charlie Hebdo, which features a cartoon of the Muslim Prophet Mohammed, was "an idiotic step that requires necessary legal measures."

According to the Independent, "OIC is studying Europe[an] and French laws and other available procedures to be able to take legal action against Charlie Hebdo.

"If French law allows us to take legal procedures against Charlie Hebdo, OIC will not hesitate to prosecute the French magazine."

French blasphemy laws have previously been used to prosecute critics of Islam. Charlie Hebdo was itself prosecuted last year, by the League of Judicial Defence of Muslims, after the magazine printed a front cover with the slogan "the Koran is crap, it doesn't stop bullets."