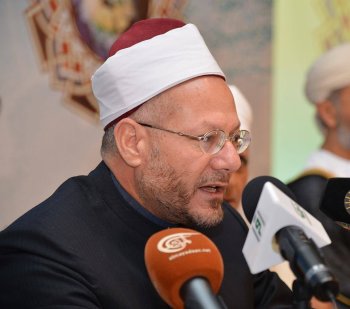 The Egyptian Grand Mufti, Shawqi Allam, has strongly criticised Charlie Hebdo's decision to print a new cartoon featuring the Prophet Mohammed. The magazine is printing a new cartoon of Mohammed on the cover of the first issue published since the deadly attack on its Paris office, and it is due to be released tomorrow morning on Wednesday 14 January.

The Grand Mufti has said the planned publication is racist, and that the cartoon would incite racial hatred and upset Muslims all over the word, according to Reuters.

In a statement, the cleric warned of a "new wave of hatred" in French society and "Western society in general" if Charlie Hebdo goes ahead with publishing a new caricature of Mohammed.

The religious leader said, "what the magazine is doing does not serve coexistence or a dialogue between civilizations."

As Grand Mufti, Allam is one of the foremost clerics in the region, with considerable influence over Muslim opinion. He has branded the planned front page an "unwarranted provocation against the feelings of … Muslims around the world."

Allam also said that the magazine was trying to create "religious strife" and "deepen hatred."

Charlie Hebdo has drastically increased its print-run, which will consist of almost 3 million copies, compared to a usual circulation of around 60,000.

The Grand Mufti is not alone among Muslim leaders in criticising Charlie Hebdo or the Western world's reaction to the attack.

Turkish President Tayyip Erdogan said on Monday 12 that the "West's hypocrisy is obvious." President Erdogan, who has moved Turkey away from its secular roots and embraced an increasingly political form of Islam, said that "as Muslims we never stood up for terrorism. We never stood up for massacres." Erdogan said that the West was hypocritical because it did not denounce anti-Muslim attacks in France.

Erdogan said "racism" and "Islamophobia" were to blame for attacks on mosques and described anti-Muslim violence as "provocations."