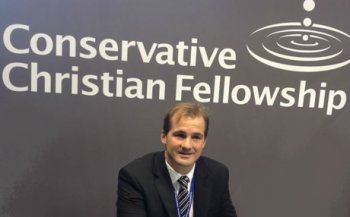 The Local Government (Religious etc. Observances) Bill to allow councillors to be summoned to pray has passed a further stage on its race to becoming law.

The Private Members Bill, tabled by Jake Berry MP (right), a member of the Conservative Christian Fellowship, is backed by both Government and Labour frontbenches and would permit prayers in the official business of local authority meetings.

The Bill is designed to overturn a High Court ruling that the practice of holding prayers during council meetings was unlawful. The ruling resulted from an application by the National Secular Society and a councillor who objected to such prayers.

The vast majority of private members' bills fail for lack of being allocated time to proceed, but the Government is demonstrating that it considers it to be of the highest priority by not only allocating the time, but fast-tracking it.

Committee stage was on 6 January 2015 and Report stage is scheduled for Friday 16 January. Fridays are known for the chamber being almost deserted with Members usually returning to their constituencies for the weekend on Thursday afternoon. The NSS said this was an indication that the Government want this Bill passed "fast, and with minimum debate."

Second reading is described by Parliament as "the first opportunity for MPs to debate the main principles of the Bill", but there was no debate at all of this Bill at Second Reading. Committee Stage supposedly for a detailed examination of the Bill (by a small number of MPs proportionately representing the main political parties). It lasted just 45 minutes, and was notable for its perfunctoriness and lack of intellectual vigour.

The discussion of the Bill, for example, saw MPs compare the prohibition on council prayer during meetings to the anti-Semitism of Nazi Germany, and blame "rampant secularism" for "damaging the fabric of the nation".

Jake Berry said that he rejoiced "to live in a country where we have an established faith." He also praised Eric Pickles, the Secretary of State for Communities and Local Government, saying that the Minister had acted "swiftly" to reverse the High Court ruling.

NSS Campaigns Manager Stephen Evans said that "Despite all the MPs on this Committee receiving NSS briefings on this Bill, they failed in their duty to properly consider the implications for religious liberty of this Bill – and it's alarming that even after Committee stage this legislation has still not received serious scrutiny or consideration."

Indeed, David Nuttall MP, speaking during the committee 'debate', acknowledged that the Bill "received no particular scrutiny or debate on Second Reading." Mr Nuttall also criticised the National Secular Society, saying that it was "strange" for the NSS to suggest that "the Bill might in some way be seen as divisive".

He added that "[the NSS] does not seem very pleased about the fact that the majority of councillors may do this [pray during Local Authority meetings] if they so wish."

Mr Nuttall also argued that the Bill was merely "permissive legislation" which gave local authorities a choice to hold prayers, and did not compel councils to do so.

Stephen Evans responded: "Councillors who wish to do so are perfectly at liberty to meet and pray before the meeting, or have a period of silent reflection during it. As we have repeatedly made clear, we have no problem with either; that cannot reasonably be described as 'intolerant'.

"The effect of this legislation would be to compel all councillors to attend prayers during official business should councils opt to do so, or else force them to leave whilst religious observances are taking place if they don't want to sit through them. That is indeed divisive, and needlessly so.

"Councillors are not elected to practise a religion, and the majority of the country is not religious. Indeed, we gave evidence that some councillors find prayers during meetings off-putting; we should not be allowing such prayers; they are not what councillors are elected to do, and our democracy needs as many councillor candidates as possible."

Labour MP Robert Flello argued that the legislation would put local authorities and parish councils in "the same position that we in Parliament enjoy, whereby for parliamentarians, at the start of our business, time is made for prayer.

"People do not have to take part in that prayer; they can sit in the Chamber and take a moment to gather their thoughts, or just gather their papers. I remember vividly that when I was first elected in 2005 I sat next to comrades who are no longer in the House who would determinedly sit on the Front Benches, reserving their place, but not taking part in Prayers and just sitting there all the way through. But they were there; they were in the Chamber. It was not any hindrance or difficulty to them; they were there."

In response, Mr Evans said that "the NSS has been contacted by both religious and non-religious councillors in the past who have had to sit through prayers as part of the official business of council meetings and did not 'enjoy' them. They should not be made to feel uncomfortable or feel they have to leave the Council's proceedings just because others wish to pray, which they could have done before the meeting proper. This is why we simply ask that councillors who wish to pray to consider it a private matter and do so before the meetings take place, rather than impose their acts of worship on others.

"It simply isn't a normal part of business meetings for prayers to take place and for MPs to argue otherwise just goes to show how hopelessly out-of-touch they are. I think most people would find it quite odd if their meetings started with a prayer."

Gerald Howarth MP said that there was evidence of "rampant secularism that is beginning to grip our society and that is extremely damaging to the fabric of this nation."

Fiona Bruce MP compared the High Court ruling with persecution of Christians in the Middle East, and with Nazi anti-Semitic legislation in the 30s: "Members might ask why I feel that I can refer to those terrible situations in this debate about the freedom to have faith observances in a council chamber such as Bideford in Devon. The reason is this: so often, persecution starts with a small amount of prohibition here or a particular piece of legislation there. Let me give the Committee an example. In the 1930s—within the lifetime of some Members now serving in this House—there was legislation in Germany that prohibited the employment of a domestic worker who was a woman of Jewish faith. No one spoke out against that or took a stand."

Comparing her views on council prayer to the anti-Semitism of the 1930s, Fiona Bruce said, "I thank my hon. Friend for speaking out; it was because people did not speak out that those things happened then."

Somewhat mistakenly, Mrs Bruce added, "That happened in this century on this continent."

Lyn Brown, Labour's Shadow Minister for Communities and Local Government, also pledged her support for the Bill. She called the 2012 High Court ruling "perverse" and said the legislation would "leave it to local communities to determine what, if any, observances are appropriate to them …. we must see this as a matter of local choice."

Kris Hopkins MP, Parliamentary Under-Secretary of State for Communities and Local Government, said that he was not aware of other cases of councillors complaining about prayers in official business, despite quoting from a NSS briefing detailing such complaints.

Stephen Evans, National Secular Society campaigns manager, said: "Local authorities are secular bodies and should not be privileging or identifying with any particular religious position. The meetings of local government should be equally welcoming to all attendees and conducted without anyone feeling compelled to participate in prayers, or feeling excluded, or that they have to absent themselves from any part of the meeting.

"The complete lack of debate or scrutiny of this Bill is an indication of how inappropriately sycophantic to religion so many of our elected representatives are – unwilling to stand up for basic secular principles and recognise that our political structures should reflect the reality of changing times by separating religion from the affairs of state."

As noted above, report stage is scheduled for Friday 16 January 2015.

The full Committee stage 'debate' can be read here

The NSS briefing on the Bill can be read here