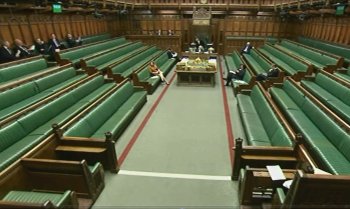 A private members' bill to allow local authorities to summon councillors to prayer has successfully completed its passage through the House of Commons and will now go to the Lords for further scrutiny.

Jake Berry's Local Government (Religious etc. Observances) Bill seeks to make provision for the inclusion of prayers or "other religious observance" or "observance connected with a religious or philosophical belief" at local authority meetings.

In an almost empty chamber, the Bill was opposed solely by Conservative MP James Arbuthnot, who acknowledged that the Bill would not force people to pray, but said it would allow a majority of local councillors to include a practice in the formal business of meetings that might be "embarrassing and possibly even anathema to other councillors".

Thanking the National Secular Society for bringing the issue to his attention, Mr Arbuthnot said the NSS has a point when it argued that an absence of prayers from the formal business of local authority meetings doesn't, as some argue, impede the religious freedoms of believers or deny anybody the right to pray.

Mr Arbuthnot said: "If local authorities want to hold a moment of reflection at the beginning of a meeting, they can do so. If councillors wish to meet for prayers before the meeting, they can do so, and no change in the law is needed to achieve it. So it is the principle of the Bill that is of concern to me".

Making reference to prayers in Parliament, he said the practice seemed "out of touch with the majority of the people we represent, because only a tiny proportion of our constituents go to church."

Mr Arbuthnot used the debate to come out publicly as an atheist, saying it had taken him 28 years "and the knowledge that I will not be standing at the next election" to make the announcement.

Mr Arbuthnot said he was "not in the least religious" and was "perfectly comfortable with that".

Stephen Evans, NSS campaigns manager, said: "It's a sad reflection of British politics that Mr Arbuthnot felt unable to publicly declare his atheism for so long. The 'Christian Country' narrative being peddled by the prime minister and secretary of state for communities only serves to marginalise non-Christians, when what we should be doing is promoting a secular, pluralistic society in which people of all faiths and none are given equal respect and standing".

An amendment tabled by Conservative MP Philip Davies that would have made prayers compulsory at the start of local authority meetings received no support from fellow MPs.

Mr Davies insisted he was not "some sort of fundamental Christian", but argued that people serving the public should start their meetings with prayers as reminder of their duty to the people they are elected to serve.

Moving an amendment to require councils to keep in mind the "pre-eminence of the Judaeo-Christian tradition", Sir Edward Leigh said he wished to "reaffirm our connection to the past through the actions of the present."

He warned of a "grave danger" of people in Britain "lacking an understanding of our history and becoming severed from our roots" which would make people "much easier to manipulate, whether by a Hitler, a Stalin, or some other modern-day tyrant whose dominion we fear."

Labour's shadow communities minister and passionate supporter of the Bill, Lyn Brown, said the Bill "seeks to protect a freedom of choice, and indeed a freedom of local choice". She said whether to include prayers or not was a matter for the local authority alone.

Describing the legislation as "gentle", communities and local government minister, Penny Mordaunt, insisted the Bill was about "freedom rather than compulsion: the freedom to pray or not to pray; the freedom for a local authority collectively to make a decision to hold prayers as part of official business, or not; and the freedom of individual councillors to attend the meeting during that item of business, or not".

With just a handful of MPs present, if any of the tabled amendments had been put to a vote, the Bill would have been unlikely to proceed, as a minimum of 40 MPs must be present to make Parliamentary decisions valid.

NSS campaigns manager, Stephen Evans, said: "It very concerning that legislation which allows local authorities to impose acts of religious worship on public servants should get such an easy passage through the House of Commons. We trust the Lords will give it more serious scrutiny.

"This Bill really needs to be exposed for what it is, an attempt by a small number of enthusiastic Christians to push their religion further into the public sphere."

See also: our briefing paper on the Bill.