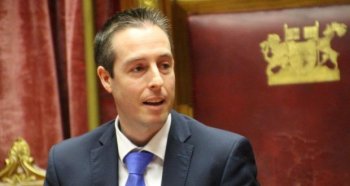 Democratic Unionist Party backbencher Paul Givan MLA (pictured above) has proposed a Private Members Bill that would create a religious exemption in Northern Ireland's equality legislation. The exemption would allow businesses to refuse services to customers on the grounds of "strongly held religious convictions". First Minister Peter Robinson has backed the Bill, saying "tolerance must include provisions to ensure that those with deeply held religious views are protected."

But the National Secular Society has warned the Bill could "legitimise victimisation of already persecuted minorities".

The Bill was prompted by the case of Ashers Baking Company, who refused to bake a cake with a message endorsing same-sex marriage. The Equality Commission subsequently pursued a civil case against the bakery. A petition launched by three DUP MPs accused the Commission of being "anti-democratic," discriminatory, and of abusing public funds in pursuing the company.

As a result of the Ashers Bakery case, Givan has now published a consultation paper on a "Northern Ireland Freedom of Conscience Bill." In the consultation, Givan writes that "some equality legislation, passed with the intention of protecting minorities, is having an adverse effect on those with religious belief." The 'Conscience Bill' would allow religious business owners to decline to serve customers, if the service would "promote or facilitate" a same-sex union.

Givan explains: "If a religious goods and services provider was required by the legislation to provide a service in a way that endorsed or promoted a same-sex union, or in some sense facilitated a same-sex sexual relationship, the provider would be made complicit in affirming same-sex sexual relationships. They would thus have to choose between acting in violation of their protected characteristic identity, surrendering their faith identity or ceasing service provision."

Keith Porteous Wood, executive director of the National Secular Society, warned that the Bill could legitimise victimisation of already persecuted minorities. He said: "I hope it will be strenuously rejected by all those who recognise the contribution that equality laws and Human Rights have made to our becoming a more compassionate and just society."

The Rainbow Project, which campaigns for the "health and well-being of lesbian, gay, bisexual and/or transgender people," has said that the Bill would actually be a "license to discriminate" against homosexuals.

The director of the Rainbow Project, John O'Doherty, added that "this proposed legislation will only be used to discriminate against LGB people" and that it "is not motivated by a desire to protect those of religious belief but by a hostility to LGB people and their hard-won rights."

O'Doherty said that the proposed Bill "is just updating 'No dogs, no blacks, no Irish' to include 'no gays'."

Givan claims that the 'Conscience Bill' would not allow discrimination on the basis of sexual orientation alone. He writes that the Bill would "not mean that an Evangelical grocer would be able to refuse to sell apples to a gay man. The selling of apples would not involve the Evangelical grocer being required to endorse, promote or facilitate a same-sex sexual relationship in violation of his/her faith identity so there is no conflict."

However, Givan notes, the Bill would "mean that an Evangelical photographer would not be required by law to choose between either taking photos of a civil partnership ceremony, and hereby act in violation of their faith identity by endorsing, promoting and celebrating same-sex unions – or lose their livelihood."

"The proposed legislation would grant special rights for people of religious belief, and only those people, to deny access to goods, facilities and services on the grounds of sexual orientation."

The consultation on the proposed amendment can be found and completed here.