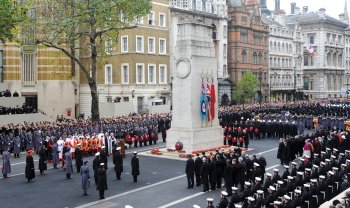 The commemoration of Remembrance Day should be rethought and re-designed to make it a truly inclusive national event, and not one that is dominated by a single Christian denomination, say secularists.

The National Secular Society (NSS) has written to the Government asking it to review the dominant role of the Church of England at the national ceremony of remembrance, which it argues should be equally inclusive of all citizens, regardless of religion and belief.

In a letter to Secretary of State for Culture, Media and Sport, Sajid Javid, the NSS says it is important that we commemorate important dates such as Remembrance "as a nation" and points out that many people feel alienated by religious services.

The letter urges the Government to bring forward proposals for a more secular and inclusive Ceremony of Remembrance, pointing out that ceremonies in other countries, such as France, are led by civic and national dignitaries without any religious element.

The calls have been backed by historian and broadcaster Dan Snow, who said it was vital that the ceremony at the Cenotaph reflects the society it serves and feels as relevant and profound today as when it was first conceived.

In an opinion piece published by the Guardian, he said:

"There is therefore a real danger that by allowing the Church and its representatives to continue to dominate, and by refusing to admit a secular presence at the ceremony, the ceremony will be diminished or even ignored by modern Britons. Those who cannot remember the past are condemned to repeat it."

"This would be a high price to pay for the sake of tradition", said the broadcaster.

The nation's religious composition has changed significantly since the Remembrance ceremony was first conceived. Britain is now one of the most religiously diverse and least religious countries in the world. Large sections of the population – around a half – do not hold or practise religious beliefs.

Despite this, the ceremony has changed little since it was first introduced in 1921. It is dominated by the Church of England and a significant proportion of the ceremony still resembles a religious service. Exclusively Christian rituals are prominent, and hymns are sung. A religious procession is led by a cross with a bishop invoking the 'Lord Jesus Christ' in a prayer.

The Cenotaph monument in Whitehall was designed at the direction of the Cabinet by Edwin Lutyens as a national secular memorial bearing no religious symbols, in recognition of the religious diversity of the fallen.

The Prime Minister, David Lloyd George, also insisted on a secular monument, in recognition of the many non-Christians who had fallen. He explicitly rejected an alternative proposal for a large cross at Admiralty Arch, and – also in tune with popular sentiment – rejected the Church's proposal for the annual ceremony to be at the tomb of the Unknown Warrior in Westminster.

Stephen Evans, NSS campaigns manager, said: "The Cenotaph was intentionally designed as a state memorial, rather than a religious one, and the rationale of it being so is even more resonant today. We're simply arguing that the ceremony itself, for the same reasons, should also be secular – inclusive of all religions and beliefs – but dominated by none.

"As citizens we have many shared aspirations and values – and hopefully a shared sense of mutual commitments and obligations – such as remembrance. One thing we do not share is religion, so it's no longer appropriate for one religion to dominate the ceremony. A truly inclusive ceremony is the best way to ensure the occasion remains relevant and meaningful for both today's citizens, and all those future generations who will need to remember."

Read a paper by Prof. Norman Bonney on the secular origins of the Cenotaph here:
https://www.secularism.org.uk/uploads/cenotaph-a-consensual-and-contested-monument-of-remembrance.pdf (PDF)

A summary of the paper, The Cenotaph: A consensual and contested monument of remembrance, can be found here:
https://www.secularism.org.uk/uploads/cenotaph-summary-a-consensual-and-contested-monument-of-remembrance.pdf (PDF)

Read the Order of the Ceremonial at the Cenotaph
https://www.secularism.org.uk/uploads/order-of-the-ceremonial-at-the-cenotaph.pdf (PDF)

It is one of the most important events...