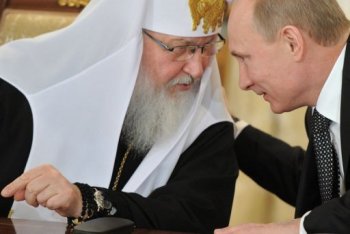 Patriarch Kirill, leader of the Russian Orthodox Church, has told an audience in Serbia that Europe has abandoned its "Christian identity" and that the "process of secularization" has reached "apocalyptic" levels.

The Patriarch blamed homosexual unions, assisted dying and abortion for starting a "locomotive of destructive processes" across Europe. Kirill lambasted the "de-Christianization of European society" which he said had given up the "fundamental Christian values in its life and activities."

Kirill criticised the "denial of absolute truth" and the "elimination of the concept of sin from the public consciousness." The Patriarch, who was speaking at the University of Belgrade, "called on the people of Serbia to help bring Europe back to Christian values." He also quoted the Bishop of Ohrid, who wrote that "Christ is leaving Europe."

Patriarch Kirill said that he regretted that "many European countries have given up their Christian identity."

The Church has very close ties with the Putin regime, and a long history of supporting authoritarian Russian leaders. After supporting the Tsarist regime as a "pillar" of the imperial state, the Orthodox Church fell under brutal attack during the first two decades of Bolshevik rule, when the League of the Militant Godless ransacked churches and killed clergymen. The Church found favour from the state once again and was reinstated, by secular authorities, during the Great Patriotic War (WW2) by Stalin; who was himself a former pupil of an Orthodox seminary and who hoped the church would improve Russian morale.

After the Cold War, the church became increasingly close to Putin, a former KGB agent. The leadership of the Russian Orthodox Church, and Patriarch Kirill himself, are widely thought by critics to have had close ties with the KGB during the last years of the Cold War, and in more recent years Kirill has been effusive in his praise of the Putin regime.

Back in 2009, when Kirill I was first elected to lead the Russian Orthodox Church, Forbes predicted that the church was "likely to emerge as an even stronger supporter of dictatorship and anti-Western ideology" because of the Patriarch's leadership, and that Putin ran both the Russian state and the Orthodox Church. The Patriarch has previously described Putin's regime as a "miracle of God", and said that the Pussy Riot protestors were doing the work of Satan.

Kirill has praised the Byzantine concept of "symphonia", where Church and State remain closely dependent on one another, and in 2006 he accused the West of behaving "dictatorially" by promoting human rights for gay people.