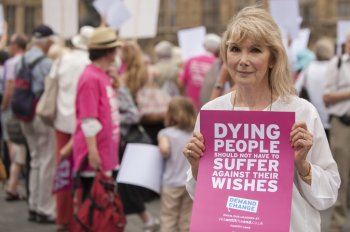 The campaign group Dignity in Dying (DiD) will be demonstrating outside Parliament next week on Friday morning 7 November (9am-1pm), to coincide with the House of Lords debate on the Assisted Dying Bill. DiD say they need "as many supporters as possible to show peers they want Parliament to act on assisted dying".

If it becomes law, the Bill would reduce unnecessary suffering of terminally ill people at the end of their lives. Two doctors would have to certify that numerous criteria had been satisfied before prescribing lethal drugs which only the patients themselves could administer.

The NSS's executive director, Keith Porteous Wood, spoke at a meeting in Parliament on Thursday (30 October 2014) to explore any ways in which the Bill could be improved. It was co-chaired by the Bill's principal sponsor, Lord Falconer, and NSS Honorary Associate Baroness Murphy and many of those attending were leaders in branches of medicine and patient care. Mr Wood was told that the Bill had been drafted so as to secure the maximum possible support of health professionals.

A recent YouGov poll found 73% of adults in England and Wales support the proposals" in the Assisted Dying Bill, but many religious groups oppose the Bill and few medical organisations are supporting it.

The National Secular Society has expressed its supports for the right to choose an assisted death. In June when the Bill was first debated in the Lords, NSS President Terry Sanderson said: "The time has now surely come for the law to reflect public attitudes and wishes on this matter. The religious bodies that are agitating to stop the legislation must be told that they cannot have the final word. Few people agree with their stand as one poll after another has shown".

The previous debate, on 18 July ran for almost ten hours of debate with 126 speakers, a record.