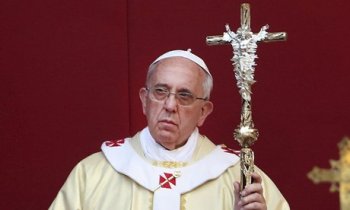 Over a dozen secularist organisations have written to the President of the European Parliament, Martin Schulz, objecting to his invitation to Pope Francis to address the Parliament.

In an open letter to Mr Schulz, the protesters argued that it was not appropriate "for any religions leader to be invited to speak to a secular parliament".

Groups representing seven European nations, and five pan-European organisations, signed the letter, which also drew attention to the Catholic Church's record on human rights and "doctrinal positions on the start and end of life and sexual matters, including women's reproductive rights" which ran counter to the values espoused by the European Union.

Despite recent, failed steps by the Pope to liberalise the Catholic Church's stance on homosexuality and the acceptance of divorcees at the recent Synod, the Church maintains conservative views on a range of issues, from contraceptive use to abortion. Catholic leaders in Ebola-stricken areas of Africa have also issued a series of statements which risk compounding the pandemic.

Reuters reported that "in May, Archbishop Lewis Zeigler of the Catholic Church of Liberia said that 'one of the major transgressions against God for which He may be punishing Liberia is the act of homosexuality'". A range of other religious groups in Africa have also linked homosexuality with the Ebola outbreak, leading to attacks and harassment directed against gay Africans.

Additionally, the Catholic Archdiocese of Lagos saw fit to issue guidance on their Facebook page stating that, despite the recommendation of other precautions, "the traditional practice of receiving Communion in the tongue is not precluded...those faithful who approach the altar and desire to receive Communion on the tongue should be given accordingly. Their personal devotion to the Eucharist must be respected". This ruling was issued despite concerns raised by officials that large religious gatherings could help the virus to spread.

The National Secular Society, one of seventeen signatories to the complaint, said that "it is entirely inappropriate for the Catholic Church to have a taxpayer funded address to the European Parliament, particularly at a time when European Union member states are pitching in to contain the spread of Ebola. Does the Parliament really feel it is appropriate to invite a religious leader whose subordinates are compounding the problems faced by health experts?"

The letter from secularist organisations also asks "what justification can be offered" for not inviting leaders of other religions from "competing denominations or sects."

Cardinal Reinhard Marx of Munich and Freising said that the Pope's address, planned for 25 November, "gives a strong signal that the pope supports and encourages the pursuit of European integration and unity".

Despite the rise of Eurosceptic parties across Europe in the last EU parliamentary elections, the Vatican said the Pope was "acknowledging the unique significance of the European institutions in the life of our continent". The Vatican also drew attention to the fact that "European integration has enjoyed the benevolent support of the Catholic Church right from its inception".