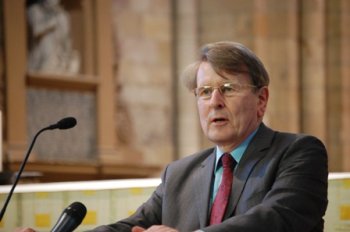 A Christian academic has called for special "conscience clauses" for Christians in laws of which they do not approve.

Professor Roger Trigg (right) told a conference of Presbyterians in Belfast that religious freedom was under attack from secularism. But Terry Sanderson, president of the National Secular Society said that Professor Trigg was demanding special privilege for Christianity which was untenable in a modern multi-faith and no-faith society.

Trigg – who has made a career out of claiming that Christianity in Britain is under attack and needs to be defended – said:

"We should be very concerned about this attack on our own values, this secular attack which tries to be neutral and involves one being not just neutral towards, but often opposed to, religion. We must be very careful therefore not to go along too much with the secular idea of neutrality of the state. Where does the state stand if it is neutral? The answer is, by definition, nowhere. British values are fundamentally Christian values, the values brought to the British Isles 1,500 or more years ago. Common law is steeped in these values."

But Terry Sanderson said that a state that was neutral about religion, so that none was favoured or disadvantaged, was safer and more protective of religious freedom that one that gave privilege to one particular religion.

He said: "Professor Trigg wants his particular religion to have special advantages, but this is a dangerous way of thinking. We see in other countries how the violently enforced dominance of one religion leads to the persecution of other, smaller, faiths. We don't want that here. The only way to avoid it is to ensure that the state does not permit itself to be dominated in the way Professor Trigg wants Christianity to dominate.

"He claims that Britain is based on Christian values and this may have been true in the past, but our nation has developed and moved on. Professor Trigg and his colleagues may not like it, but Christianity is not the only religion in Britain and there is no longer any justification for it being part of the state."

Professor Trigg, who is emeritus professor of philosophy at the University of Warwick, complained that the 2009 Lisbon Treaty, described as an attempt to streamline EU institutions to make the enlarged bloc of 27 states function better, did not mention Christianity. He also said that recent laws on gay marriage and other socially progressive legislation did not allow for Christians to opt out.

He claimed that if religion is attacked, then human nature is being stifled – "and that is very sad for human flourishing".

Prof Trigg said it was important that all Christians were on the same side because they all faced the same restraints. He added human rights were not opposed to religion.

Terry Sanderson responded that religious freedom was indeed an important human right, but it was not absolute. "Religious freedom cannot mean the freedom to take other people's rights away from them. Professor Trigg, like so many from the Religious Right, seems to be of the opinion that Christians are so special that they are entitled to be above the law and have he right to treat others with disrespect and injustice. That is not acceptable and society has made clear that it will no longer tolerate religious bigotry simply because some Christians claim they have a divine right to practise it."