A ‘New Magna Carta’: time for a codified constitution? 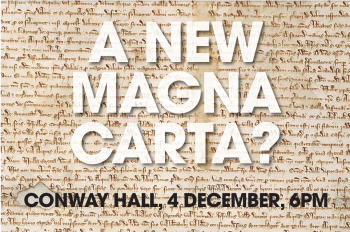 As the 800th anniversary of Magna Carta approaches, has the time come for the UK to have a codified constitution? And if so, what form should it take?

These issues will be discussed at a public event at Conway Hall on Thursday 4 December, by Graham Allen MP, chair of the Parliamentary Political and Constitutional Reform Select Committee, and Bob Morris, from the UCL Constitution Unit.

The speakers will set out the pros and cons and consider the possible implications for secularism.

The Political and Constitutional Reform Select Committee has launched a major consultation into the UK's current and future democratic settlement, which could potentially lead to the constitution being codified in what is being called a 'New Magna Carta'. The committee have recommended three possible ways forward:

Graham Alan, the Labour MP for Nottingham North, is an honorary associate of the National Secular Society, and a high profile supporter of constitutional reform.

Bob Morris is a former Home Office civil servant, now working at the UCL Constitution Unit. Bob has worked on a number of ecclesiastical and royal issues, including their 2009 report on Church and State in 21st century Britain.

"This welcome consultation raises vital questions for secularists – and indeed everyone else in the country. Our two distinguished speakers will be well-placed to discuss them and answer questions about where this might lead.

"While many see codified constitutional law as the best way to protect secularism and equality, others are concerned at the possibility that current inequalities and religious privileges could become entrenched in a written constitution, which could not be easily amended.

"We would like to see a new Constitution incorporating principles in Human Rights instruments, equality law and the NSS's Secular Charter could usefully be incorporated in a new constitution."

The event is free and open to all but attendees must either register online or reserve places by calling 020 7404 3126.

If you'd like to take part in the consultation, you can submitted your comments via the Committee's website or by post to the Political and Constitutional Reform Select Committee, House of Commons, London, SW1A 0AA.