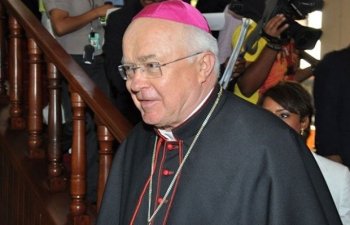 Archbishop Josef Wesolowski, the highest ranking Catholic to be investigated over child abuse, is now under house arrest at the Vatican pending a criminal trial following accusations of the sexual abuse of minors in the Dominican Republic (DR). It would be the first such trial, with the Pope keen to be seen to be treating child abuse with vigour.

Wesolowski was secretly recalled earlier this year from the DR where he was the Papal Nuncio following widely publicised accusations of him having sexually abused boys. He underwent a canonical, as opposed to criminal, trial at the Vatican which concluded he should be defrocked. Nevertheless the well-connected Wesolowski, ordained both as a priest and a bishop by St. John Paul II, was seen in June walking freely in a street in Rome. An international arrest warrant has reportedly been issued for a fellow Polish cleric thought to have been assisting him in the DR with the procurement of minors.

His case is a huge embarrassment to Vatican at the highest levels as a papal representative accused of having actively participated in child abuse.

The National Secular Society drew Wesolowski's case to the attention of the Children's and Torture Committees at the United Nations, who later raised it with the Holy See. A recent article in the New York Times featured graphic details of the accusations against Wesolowski, including of the boys being bribed, one even with medicine for his epilepsy. The evidence appeared uncharacteristically to unnerve the Vatican and appeared to prompt an almost immediate statement that diplomatic immunity was no longer claimed, so Wesolowski might also face trials elsewhere.

Keith Porteous Wood, executive director of the National Secular Society, said: "The Pope himself realises that he and the Church will be judged by the way this case is handled. He should arrange for Wesolowski to be tried in the DR or Poland. A criminal trial in the Vatican seems pointless, given the likely absence of key witnesses and a distrust of the objectivity of the Vatican, hardly used to conducting such trials."