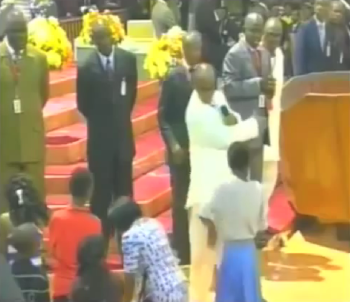 The National Secular Society has called on the Home Secretary to deny a controversial Pentecostal Nigerian 'witch hunter' pastor entry into the UK.

David Oyedepo is due to address a Winners Chapel International convention in Dartford on 13-16 August. In a letter to the Home Secretary the National Secular Society argued that preventing Mr Oyedepo from entering the country is a necessary step to tackle child abuse linked to faith or belief.

Unconfirmed reports say that Pastor David Oyedepo has been barred from entering the United Kingdom by The Home Office.

A source at the Muritala Mohammed International Airport has stated that the barring of Oyedepo, who holds a 'C' Visa that allows him entry into the UK for ten years, was communicated to airlines via an 'Airline Alert' on Saturday, 9 August, 2014.

In 2011 Mr Oyedepo was captured on video assaulting a young girl at one of his ministration events in Nigeria. After accusing the girl of being a witch, she can be heard saying she is a "witch for Jesus". Mr Oyedepo then slaps her around the face and denounces her as evil.

According to a CNN report, in 2013, Cameroon's President Paul Biya ordered the closure of nearly 100 churches citing criminal practices organised by Pentecostal pastors that threatened the nation's security. A Government official told CNN that the group's pastors had "outstretched their liberty" by "faking miracles" and "killing citizens" in their churches.

The same report also states that on 11 August 2013, a 9-year-old Christian girl collapsed and died during a prayer session in a Winners' Chapel in Bamenda. The girl's mother, Mih Theresa, told CNN that the pastor intended to "cast out the numerous demons" that were in control of her daughter's life. The report also refers to pastors dissuading people from seeking medical treatment or forbidding the taking of medication, with apparently lethal consequences. The pastors, however, claim the closures are to suppress criticism of the Government.

In 2006 a Government report – Child Abuse Linked to Accusations of "Possession" and "Witchcraft" – highlighted the risk of abuse against children in Britain accused of being witches.

Recent guidance written by the Metropolitan police advises social workers that "children believed to be possessed by evil spirits or believed to be witches are at clear and immediate risk of significant harm".

Although cases of child abuse linked to a belief in spirit possession or witchcraft are uncommon in the UK, such abuse can lead to extreme physical and emotional abuse and to child deaths. The cases of Victoria Climbie, Kristy Bamu and Ikpomwosa, whose torso was recovered from the Thames, were all child deaths linked to this belief system.

David Oyedepo Ministries International website makes clear that child "disobedience" should be regarded as a sign of "witchcraft". It states:

Bishop Oyedepo, founded Winners' Chapel in 1981 after claiming to have had an 18 hour vision from God. The Church has since become a global network of churches with congregations in 34 countries and Forbes estimates his worth at $150 million. Oyedepo's UK church has been the subject of an investigation by the Charity Commission over reports that it misappropriated about £16m it received as tithes from its members between 2008 and 2011.

Keith Porteous Wood, executive director of the National Secular Society, said: "Those being denounced as "possessed", particularly children, are in great, sometimes mortal, danger. Denying Mr Oyedepo entry would send a powerful signal to pastors and churches that "witch hunting" will not be tolerated in the UK."