German newspaper forced to apologise over criticism of Islam piece 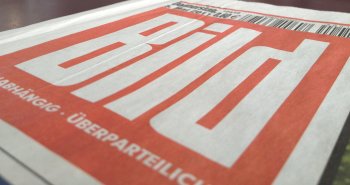 Germany's biggest selling newspaper, Bild am Sonntag, has had to apologise for an editorial comment piece which has sparked debate and controversy in the country for its criticism of Islam, the Local has reported.

In his brief piece, the tabloid's vice editor in chief, Nicolaus Fest, accused Islam of having a "murderous contempt for women and homosexuals".

He said, "I don't believe in God, but at the same time Christianity, Judaism or Buddhism don't bother me. Only Islam bothers me more and more".

Fest said he was "bothered" by the "considerably disproportionate criminality of youths from Muslim backgrounds", by forced marriages and 'honour killings'.

Mr Fest's comment piece was widely shared on social media, and quickly drew harsh criticism from many - including politicians - who called it racist and demanded an apology to all German Muslims – of which there are an estimated 4.3 million in the country.

In response to the outcry, Bild's editor-in-chief Kai Diekmann wrote an online editorial article rejecting Fest's arguments for not having drawn a line between Islam as a religion and the political beliefs of Islamism.

He said, "For Bild and Axel Springer there has been a clear, unshakeable dividing line between Islam as a world religion and the degrading ideology of Islamism.

"That's why in Bild and Axel Springer [publications] there is no room for generalized, depreciating comments against Islam and the people who believe in Allah".

Mr Diekmann stated that, "We don't want such a debate along religious lines. We don't want to lead it, take it up or conjure it. For they always end in disaster - history has shown that to us often enough."

Mr Diekmann has been Bild's editor-in-chief since 2001 and is also an executive board member of the Turkish daily Hürriyet.

Mr Fests's comment piece was published in the wake of number of anti-Semitic incidents which have occurred over the past few weeks in Germany and beyond, in the context of protests against Israel's Gaza operation. During a demonstration in Paris, chants of "Jews to the gas chambers", were heard.

There has been shock at the tenor of the anti-Israel chants at some of the demonstrations.

In Germany, incitement to racial hatred, which includes the chanting of anti-Semitic slogans, is forbidden under anti-racism laws.

The German Government sought to reassure Jewish people living in the country that they should feel safe.

Chancellor Angela Merkel's spokesperson, Georg Streiter, condemned the threats made at the protests, arguing that they constituted an "attack on freedom and tolerance, and an attempt to destroy Germany's democracy".