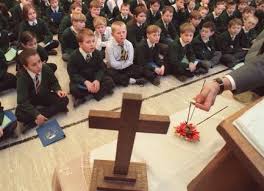 The legal requirement for schools to provide a daily act of 'broadly Christian' collective worship should be replaced with "spiritual reflection" drawing mainly on the Christian faith, the Church of England's head of education has said.

The Bishop of Oxford, the Rt Rev John Pritchard, said compulsory participation in collective worship was more suited to the 1940s, but said schools should still be required to make time for "spiritual reflection" which should draw "mainly on Christian faith and values and those of the other great religious traditions."

Rev Pritchard said compulsory worship could actively put people off religion and said it was "meaningless" to people who do not believe. But he said "church schools will continue to worship God because worship is at the heart of Christian belief and discipleship."

His comments echo those of the National Governors' Association, which recently become the latest body to recommend that the religious element of daily school assemblies should be scrapped.

Worship of a "mainly of a broadly Christian character", has been a legal requirement in all state schools since the 1944 Education Act. Schools can apply for a determination from the local authority to replace the Christian element of the worship with that of another faith, but schools are not permitted to opt out of collective worship altogether.

The National Secular Society is calling on all political parties to commit to removing the requirement in the next parliament.

Stephen Evans, NSS campaigns manager, said: "Even the Church of England now realises that a law requiring pupils to take part in an act of Christian worship is completely unjustifiable.

"The law as it stands is an anachronism; the legacy of a society unrecognisable from the diverse and pluralistic Britain of today where citizens hold a wide variety of religious beliefs, including no religious belief.

"School assemblies with an ethical framework can make a valuable contribution to the spiritual, moral, social and cultural development of pupils, but legally imposing acts of worship or 'spiritual reflection' is not required to achieve these valid educational goals."