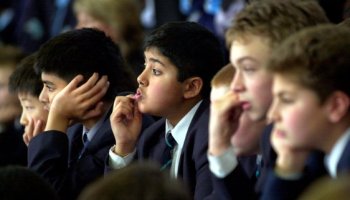 The National Governors' Association, which represents 300,000 school governors in England, has become the latest body to recommend that the religious element of daily school assemblies should be scrapped.

The NGA says the law that requires pupils to take part in a daily act of worship of a "broadly Christian nature" has become an anomaly in a multicultural nation. It revised its policy in June, saying:

"Few schools can or do meet the current legislative requirement for a daily act of collective worship, partly because there isn't space in most schools to gather students together, and often staff are unable or unwilling to lead a collective worship session. There is also the added issue that worship implies belief in a particular faith - if the 'act of worship' is not in your faith then it is meaningless as an act of worship."

"Removing the collective worship from the remit of schools that are not faith schools would not prevent them from holding assemblies that address a whole range of topics, including faith and belief.

"In addition, it does not alter our position on religious education; it is important that students should continue to be taught a broad and balanced curriculum that encourages a knowledge and understanding of all faiths."

The NGA's policy statement says schools are not "places of worship but places of education and expecting the worship of a religion or religions in all schools should not be a compulsory part" of the timetable.

A poll by the BBC in 2010 found that 64% of adults were not in favour of maintaining the law on collective worship.

The NGA's policy statement was welcomed by the National Secular Society, which has long campaigned for an end to compulsory worship in schools.

Terry Sanderson, President of the NSS, said: "There are many problems for schools in trying to fulfil this requirement – one of them is that teachers themselves are not interested in religion and are unwilling to be coerced into foisting on to their pupils"

Mr Sanderson said that the National Secular Society receives a "steady stream" of complaints from parents who are concerned, annoyed and sometimes appalled about what their children are exposed to in religious assemblies in schools. "Sometimes they are unaware of their right to withdraw their child and even when they are they are reluctant to put them in the position of feeling 'different' to their classmates."

Mr Sanderson said that the value of a morning assembly – in which the school can talk about issues related to the school or discuss other important issues – has been hijacked for religious purposes, which children themselves often resent.

Visit our campaign page on collective worship to find out about your rights and how you can get involved.