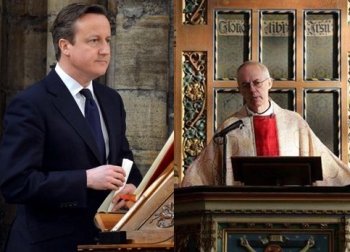 Prime Minister David Cameron has again stood by his assertion that Britain is a "Christian country", saying he believes "very deeply that we should be confident in that status as a nation".

His assertion came as the latest British Social Attitudes survey revealed that 50.6% of the population now claim to have no religion (up from 47.7% last year). The proportion of the British population who identify themselves as Anglican has more than halved in the past ten years, with just 41.7% now regarding themselves as Christian. 4.6% self identify as Muslim, 1.5% as Sikh, 1.5% as Hindu and 0.5% as Jewish.

The survey found just 24% of people think being Christian is an important element of 'Britishness' – down from 32% in 1995.

The Prime Minister's latest remarks were included in the foreword to the programme for a National Parliamentary Prayer Breakfast held on Tuesday, organised by the all-party parliamentary group Christians in Parliament.

The Prayer Breakfast provides Christian organisations with an opportunity to meet with and lobby parliamentarians – around 80 MPs and 20 peers attended the breakfast and associated seminars, along with almost 600 churchgoers, campaigners and lobbyists.

David Cameron became the first prime minister since Margaret Thatcher to attend. Mr Cameron repeated his claim that the UK is a "Christian country". He said it was "absolutely right that our Parliament should express this confidence through this annual prayer breakfast."

Mr Cameron also said he believed Christianity could inspire politicians to "get out there and make a difference to people's lives".

Justin Welby became the first Archbishop of Canterbury to speak at the event and shared a table with the Prime Minister. Mr Welby delivered the key note speech on "Global Christianity in the 21st Century" raising issues such as the persecution of Christians through blasphemy laws in Sudan and Pakistan. Mr Welby also used the opportunity to defend state funded "church schools" following recent criticism of the role of religion in schools following the so called 'Trojan Horse' plot.

Ed Miliband also attended, making it the first time the leader of the opposition and prime minister have both done so – something reflected on in the speech of Stephen Timms MP, the Labour Party's 'faith envoy' and Chair of Christians on the Left.

The event is modelled on the American National Parliamentary Prayer Breakfast, held annually in Washington DC, which has been attended by every president since Dwight Eisenhower and is and is organised by The Fellowship Foundation, a conservative Christian organisation

Keith Porteous Wood, executive director of the National Secular Society, said: "Politicians are as entitled to their personal faith, or not to have a faith, as everyone else, but when a PM agrees to attend a religious event of this kind, other political leaders, even if not religious, will feel beholden to go too, which seems an imposition on them.

"No doubt the churches will consider the prayer breakfast a coup, but the PM may yet regret attending it. The British public have never liked politicians wearing their religion on their sleeve or seeming to imply that they or their religion are better than others.

"Three out of five of the population are not Christian - and that proportion is growing fast. The Prime Minister's message should therefore be to stress cohesion rather than to trumpet baseless Christian triumphalism. The non-religious becoming the majority should be a signal to the PM to treat them with more respect, but instead he seems intent on marginalising them."