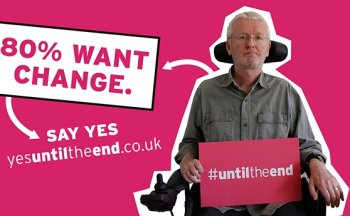 The campaign group Dignity in Dying has launched a campaign aimed at the three main party leaders asking them to support a change in the law to enable assisted dying.

A Private Members' Bill – The Assisted Dying Bill – introduced by Lord Falconer, will receive its Second Reading in the House of Lords on Friday, 18 July. Ahead of the debate, Dignity in Dying are calling on supporters of a change in the law to email party leaders to call on them to back the Bill.

The Bill would only legalise assisted dying for terminally ill adults with six months or less to live. The patient would be provided with life-ending medication that they would have to take themselves after two doctors declared their illness meant they that they had six months or less to live, and had made a clear and settled decision with time to consider all other options.

The proposed Bill does not permit the doctors to administer the medication, would not legalise assisted suicide for people who are not dying (for example disabled people or older people) and would only apply to adults with mental capacity both at the time of their request and at the time of their death.

A recent YouGov poll (pdf) found 73% of adults in England and Wales support the proposals in the Bill. Only 13% did not think the Bill should become law, with 13% undecided.

Despite widespread opposition from religious groups, the majority of religious adherents also support a change in the law on assisted dying.

According to other poll, 72% of Anglicans think people with incurable diseases should have the right to ask close friends or relatives to help them commit suicide, without fear of risking prosecution. Despite this, the Church of England has made clear its opposition to any change in the law, or medical practice, to make assisted suicide permissible or acceptable.

Describing assisted dying as "crude", the Church says "suffering must be met with compassion, commitment to high-quality services and effective medication". The Church's bishops are expected to oppose the Bill in the House of Lords.

56% of Catholics also support a change in the law despite Roman Catholic leaders being particularly vocal against assisted dying.

Liberal Democrat Peer and NSS honorary associate Lord Avebury, said: "This Bill can save a small but significant group of terminally ill patients from an agonising death. There is no way it could be misused, or that its rigorous safeguards would allow its limited purposes to be widened".

Crossbench Peer Baroness Murphy – another NSS honorary associate, said: "As a doctor, the relief of suffering at the end of life and respecting dying patients' individual sustained wishes about their own care take precedence. I welcome this Bill as an opportunity to clarify a difficult and complex area of current law and allow patients who are terminally ill to make real choices about life's end."

NSS President, Terry Sanderson, commented: "On assisted dying, as with same sex marriage, the Church of England is at considerable odds with the country's Anglicans, and even more with the population as a whole. Yet it seeks to justify its establishment, and the anachronistic privilege of its bishops in the House of Lords, on the grounds that it speaks for everyone. This is a self-serving delusion. Its bishops should not only abstain from voting on this issue but consider very carefully before advising peers to oppose the Bill."

Those supporting a change to the law are asked to make their voice heard by emailing party leaders.

Also see: Terry Sanderson: The choice of when to die should be that of the individual – not religious leaders