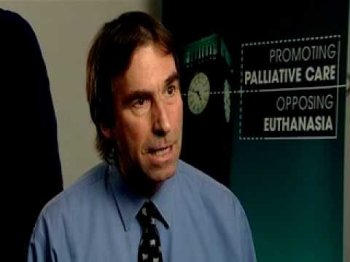 A Christian charity has launched a booklet aimed at equipping Christians with arguments against euthanasia and assisted suicide so that they can take action ahead of expected renewed attempts to change the law across Britain.

The booklet, authored by Chief Executive of the Christian Medical Fellowship, Dr Peter Saunders (right), was produced by Christian Action Research and Education (CARE), a Christian charity seeking to provide "resources and helping to bring Christian insight and experience to matters of public policy and practical caring initiatives".

Its publication comes as part of CARE's 'Live and Let Live' campaign launched last month which seeks to "inform and equip Christians to take action on issues relating to the end of life" and "explore and understand the Biblical view of assisted suicide and euthanasia". CARE says that the idea of the campaign is to equip and inform Christians to take action on the issue of assisted suicide.

The booklet outlines what the Bible says about end-of-life issues, stressing that there is "no provision in scripture for compassionate killing". In what might be taken as menacing in tone, the author notes that "for those who do not know God, neither euthanasia nor assisted suicide are 'merciful release'". The booklet also provides other "powerful arguments" against assisted suicide, arguing that any change in the law to allow assisted suicide would place pressure on vulnerable people, and that the current law against the practice acts as a strong deterrent against abuse.

The booklet has been launched ahead of renewed attempts to change the law in Britain, with Lord Falconer's assisted dying bill expected to be re-tabled in the new Parliamentary session. If passed, the bill would mean that a person who is terminally ill may request and lawfully be provided with assistance to end his or her own life.

The Scottish Parliament is currently considering similar legislation conceived originally by the late independent MSP Margo MacDonald who died from Parkinson's disease in April. 'The My Life, My Death, My Choice' campaign presented a petition this week to Holyrood signed by 2,500 people urging MSPs to pass the Assisted Suicide (Scotland) Bill.

Keith Porteous Wood, executive director of the National Secular Society, commented: "Once more the Christian lobby is seeking to impose its bible-based objections to deny, under any circumstances, choice to the majority, including many Christians, who wish to avoid the unnecessary indignity of a drawn out death."