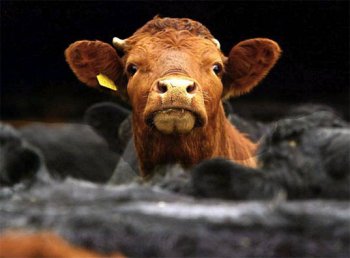 The National Secular Society is backing a new campaign by the British Veterinary Association (BVA) to end non-stun slaughter of animals to improve animal welfare.

A petition launched by the BVA with the support of the RSPCA calls on the Government to ban slaughter without pre-stunning for all animals.

EU and UK law requires all animals to be pre-stunned before slaughter in order to minimise suffering. The only exemption is for religious communities to meet Jewish and Muslim religious requirements.

Organisers of the petition make clear that their concerns do not relate to religious belief but to the animal welfare compromise of non-stun slaughter.

The National Secular Society has long campaigned for an end to the exemption that allows religious communities to slaughter animals without pre-stunning.

There is currently no requirement under UK or EU law for the meat from animals slaughtered without stunning to be labelled as such. As a result, meat from non-stun slaughter methods is routinely sold on the general market.

The petition also calls for clearer slaughter-method labelling and post-cut stunning to improve welfare until such time as non-stun slaughter is outlawed.

"BVA has long believed that slaughter without pre-stunning unnecessarily compromise animal welfare at the time of death. It affects millions of animals every year and action is long overdue.

"When the issue hit the headlines recently we were overwhelmed by the letters of support from members of the public as well as our own members, so we hope to get a lot of support for our campaign."

"We are supporting the BVA's petition calling for an end to non-stun slaughter because it is a practice that can cause suffering to millions of farm animals in the UK.
"We recognise that religious belief and practices should be respected but we also believe that animals should be slaughtered in the most humane way possible."

"The scientific consensus is clear that it is more humane to stun an animal prior to slaughter than not to do so. We therefore call on the Government to ensure that animal slaughter regulations designed to protect the welfare of animals are applied equally and without exception."

If, as the BVA hopes, the epetition achieves 100,000 signatures it will be considered for a debate in the House of Commons.