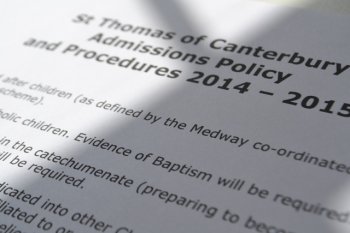 Parents of a child refused a place at a state funded Catholic school have criticised the school over its admissions criteria, and say the school's policy of giving preferential treatment to worshippers has left their lives in turmoil.

Oscar, aged 4, has been denied a place at St Thomas of Canterbury primary school, near Gillingham, because his parents, who live just minutes away from the school gates, don't regularly practice a religion.

The family now say they will be forced to withdraw their other son from the school, which he has attended since the age of 3.

The boy's father, David Patterson, a non-practising Christian, and his wife, of Hindu background, said the anger and stress caused by the school's unfair admissions policy has caused havoc to their family life.

Mr Patterson said: "Being discriminated against because of your religion isn't a good feeling. What has really shocked us is the way the school has showed no regard whatsoever for the effect this is having on our children and on ourselves, who are expected to deal with the upset and stress in having to take our children to two separate schools, as well as care for our young baby. It just can't be done.

"This unrest and lack of care from the school has forced us to make decisions concerning removing our eldest child from St Thomas's and request a place at the same school as his younger brother."

Despite being publicly funded, the school says it exists primarily to serve the Catholic community and that Catholic children will always have priority.

The school's strict admissions criteria give priority to "baptised Catholic children" and children of other denominations and religions who can provide evidence of their faith. Children from non-religious or non-practising backgrounds are only admitted if additional places are available after children from faith backgrounds have been prioritised.

Schools with a religious character have an exemption from the Equality Act, which prevents people from being treated worse than others on grounds of religion and belief.

Mr Patterson said: "Even given the exemptions, I fail to see why a Catholic school should be permitted to give preferential treatment to children from other religious traditions over children from non-practising or atheist families."

"I'd prefer our children to decide for themselves what they believe when they're old enough to make an informed decision. Parents who choose not to put a religious label on their children are treated as second class citizens", added Mr Patterson.

The family say they have received support from local religious figures, including the local Catholic priest, who told them the school should have used its discretion to "keep a loving family unit together".

Stephen Evans, campaigns manager at the National Secular Society, said: "This is just one example of how unfair and discriminatory admissions arrangements impact on the lives of families up and down the country.

"Discrimination based on religion or belief is rooted in a bygone era and should have no place in state education. A fair and reasonable admissions policy would not turn away local children from publicly funded schools simply on the basis of their parent's beliefs or lack of religious practice."