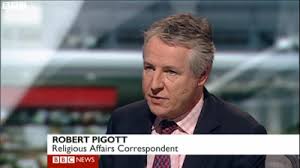 The BBC has announced that it is replacing its present religious affairs correspondent, Robert Pigott, with Caroline Wyatt who is currently its defence correspondent.

Pigott has been covering the BBC's religion mandate for ten years and from July joins the pool of general reporters. He will cover the General Synod debate on women bishops as his last assignment in the job.

Caroline Wyatt has been BBC defence correspondent since 2007. She also covered the 2003 invasion ofIraq, joining British troops on the ground there. She has also been the BBC'sMoscowcorrespondent.

Ms Wyatt has been told to be "ambitious" in her new brief, "covering religion, faith and ethics at home and abroad".

She told the BBC's in-house magazine Ariel: "I'm really looking forward to exploring the religious faultlines around the globe, looking at the challenges posed at home and abroad by religious extremism, and covering the beliefs and ethics of the billions of people of different faiths around the world.

"I'm also keen to explore the scientific debate over religion and the nature of belief, and reflect on what religion means to people in the UK and elsewhere."

She told the magazine that she wanted to show religion in all its aspects – positive and negative – "how it can be harnessed for great good, but also be used to divide nations and communities, sometimes with terrible consequences".

Wyatt will hold the same religious affairs correspondent title as Pigott, rather than that of religious affairs editor - a title that would carry more authority. The Church of England called for such a position in 2010, when it said there was a need for "a recognised expert to bring greater co-ordination and depth to the corporation's religious output across all channels". The BBC has resisted that demand.

Terry Sanderson, President of the National Secular Society, said: "This is welcome news. It sounds as though Caroline Wyatt will have a much more balanced approach to religion than Robert Pigott and is likely to be far more realistic about it."

Mr Sanderson said that over the years Robert Pigott had produced some of the most unbalanced reports he had seen on the BBC news. "Look at the last one over the recent 'Britain-is-a-Christian-nation" debate which is totally skewed, giving any opposition only a passing reference and almost all the time to making Christian propaganda."

Mr Sanderson said that Pigott had managed to report the NSS's council prayers court case without including any spokesperson from the NSS in his TV news packages.

On a similar theme, The Times has scrapped the post of religious affairs correspondent, ending the 27-year long tenure of Ruth Gledhill. The Times was the last national newspaper to have a reporter dedicated solely to religious matters.

Commenting in the Catholic magazine, The Tablet, Clifford Longley, who is a former religious affairs correspondent for both The Times and The Daily Telegraph, said: "In the case of newspapers, they will continue to report on religion though less of it. In a subject of considerable complexity rife with public misunderstanding, expertise is no longer, by and large, thought necessary. That is itself an insidious kind of secular judgement - that making a mess of the coverage of religion is now a risk the media is prepared to run because the subject doesn't matter any more."