Prime Minister calls on Christians to be more "evangelical" 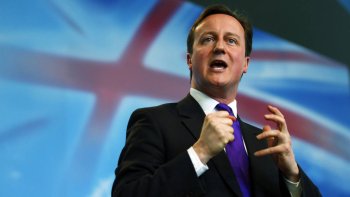 In his most recent effort to highlight his strong Christian faith and the importance of Christianity within the UK, David Cameron has called for Christians to be more "evangelical".

Mr Cameron criticised those promoting state neutrality on religion, saying they failed to grasp the role that religion can have in "helping people to have a moral code". He contrasted "secular neutrality" with "the Christian values of responsibility, hard work, charity, compassion, humility, and love".

He also expressed the hope that "we can [...] infuse politics with a greater sense of evangelism about some of the things we are trying to change. We see our churches as vital partners. If we pull together, we can change the world and make it a better place."

The Prime Minister's comments were made in an article authored by him, "My faith in the Church of England" and published in the Church Times.

He also announced that the government would be giving £8 million to a Church urban fund, Near Neighbours, which brings together people in religiously and ethnically diverse communities.

His article follows a video Easter message, in which he noted "countless acts of kindness carried out by those who believe in and follow Christ", and an Easter reception at Downing Street in which he called for an expansion in the role of faith and faith organisations in the UK.

His most recent comments come after church leaders have, for the second time in two months, made the headlines by publicly urging the government to take action on food poverty.

As part of a campaign organised by the End Hunger Fast, 47 bishops and over 600 non-conformist leaders and clergy from across all the major Christian denominations in Britain have co-signed a new letter calling for urgent Government action on food poverty

And in February, 27 bishops wrote to the Daily Mirror saying that Cameron had a moral duty to act on the growing number going hungry.

Terry Sanderson, president of the National Secular Society, said: "The Prime Minister's description of Britain as a "Christian country" is one most people simply won't recognise.

"Around half the population don't belong to any religion and the religious among us follow an increasingly diverse range of faiths. They should not be made to feel like less than equal citizens by the prime minister asserting the moral superiority of Christianity.

"Mr Cameron is of course entitled to his personal beliefs but he must realise that as the Prime Minister of a democratic and diverse nation his remarks are wholly inappropriate.

"Non-Christians may feel particularly aggrieved by Mr Cameron's divisive assertion that we are a "Christian country", but everyone should be concerned at his suggestion that essential state functions such as education and welfare should be handed over to religious organisations."