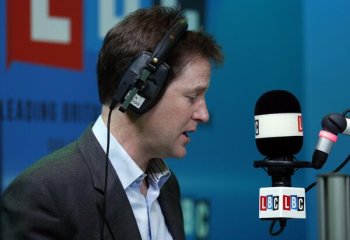 Lib Dem leader Nick Clegg has called for the "eventual" disestablishment of the Church of England.

Speaking on his weekly phone-in on LBC radio he said, in response to a caller:

Asked about his views on Mr Cameron's assertion that Britain is a Christian country, he said:

'As it happens, I'm not a man of faith, but I don't actually find it particularly controversial to say just look at our history, our heritage, our architecture, our values, or something… of course, you know, of course it's infused by Christianity. In many ways I was slightly nonplussed by people getting very worked up about because I thought, well, you know, I'm not a practising man of faith but I don't find it an issue to say, you know, we have an important, sort of, Christian identity in terms of our history and heritage and so on.

'That is not to say, Paul [the listener calling in], which I think is maybe what lies behind your question, that somehow we are exclusively Christian, that somehow everybody is a Christian, or indeed that we have got one Christian denomination, there are almost as many Catholics as Anglicans in this country, and of course we should remember that one of the greatest Christian values, if you want to put it that way, of tolerance is that we are open to people of other denominations, other faiths, of all faiths, and none and I think that is what makes our country, it's this sense of fair play and tolerance which I think makes our country very, very special.

'I mean, more generally speaking, er, about the separation of religion and politics, as it happens, my personal view, I'm not pretending this is something which is discussed in the pubs and kitchen tables of Britain but my personal view is in the long run, having the state and the church basically bound up with each other as we do in this country, I think, you know, I think in the long-run it would actually be better for the church and better for people of faith and better for Anglicans if the church and state were over time to sort of stand on their own two separate feet, so to speak.'

'No I don't want to see that, I think our arrangements work well in this country. As I've said before, we're a Christian country, we have an established church, and being a Christian country, I find other faith leaders and members of other faiths say that it makes us almost more understanding, more tolerant, more understanding of the role that faith and religion plays in our country.

'And actually, faith organisations do an enormous amount in terms of supporting schools, supporting charities, helping to build what I call the bigger society. So I don't want to see what the Deputy Prime Minister has set out, it's a long-term liberal idea but not a Conservative one.'

Terry Sanderson, President of the National Secular Society, said: "At last, we have a high profile politician have the courage to say that separating church and state would be a good idea. None of the others dare say it, although it is quite clear that the time has come to do it. Mr Cameron, has now made clear that he has no intention of making any changes, but he and his newly-discovered piety won't be there for ever. "