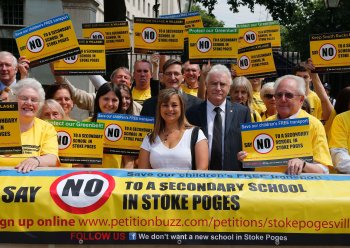 Non-religious and Christian parents who have been allocated places for their children at a Sikh free school have argued that their right to educate their children according to their beliefs is being infringed.

A number of parents have contacted the National Secular Society after being allocated places at the controversial Khalsa Academy Secondary School in Stoke Poges in Buckinghamshire, despite not including the school in their list of preferences.

Parents are now investigating the possibility of a human rights challenge. One parent told the NSS: "We're not a religious family so it's clearly inappropriate for our children to be educated at a school with an overtly religious ethos. We'll challenge this all the way."

Another parent said: "I am extremely upset and shocked. We are not a religious family, and yet I am being told I have to send my child to a faith school.

"How can I explain that to my child? Surely this is against the Human Rights Act to force a child to attend a faith school?"

The European Convention on Human Rights requires states to respect the right of parents' religious and philosophical convictions in respect of education and teaching. This aspect of the right is closely aligned to Article 9 of the Convention, which protects the right to freedom of religion and belief. It does not require the government to provide or subsidise any specific type of education.

Stephen Evans, campaigns manager at the National Secular Society, commented: "Leaving parents with no option other than to send their child to a school with an ethos entirely inconsistent with their own beliefs clearly fails to respect their right to have their religious and philosophical convictions respected.

"The best way to ensure everyone's rights are protected is to have inclusive schools that are equally welcoming to pupils regardless of their religion or belief background."

Mike Appleyard, cabinet member for education and skills at Buckinghamshire County Council said: "Buckinghamshire's 69 faith schools are treated in the same way as schools with no faith background. Parents who prefer their children not to attend a faith school are able to make a transfer appeal application to the independent appeal process."

All parents of children allocated places at Khalsa Academy against their wishes are believed to be submitting appeals.

Despite describing itself as an "inclusive school", Khalsa Academy claims to provide a "learning environment within which children learn about spirituality, faith and practice Sikh values." Panjabi and Sikh Studies are compulsory for all Sikh students, while non-Sikhs are separated to study an alternative modern foreign language. The school's 'Collective Worship' features prayers of a Sikh nature, and a religious questionnaire for parents wishing to send their child to the school makes clear that the school has "regular religious functions" in which families are expected to take part.

In a video on the school's website, Nick Singh Kandola, Chair of the school's board of Trustees, says "As Sikhs we believe this is a unique opportunity. This life time is given to us on earth to help those in need, to excel in ourselves and to find God – that's our purpose here and we want to teach children those core values."

The school offers exclusively vegetarian meals with parents not permitted to make packed lunches in order to stop meat, fish, or eggs being brought onto site, which is also regarded as a place of worship. However, the school's head has claimed in the local media that the school meals policy is simply based on trying to "encourage a healthy diet" rather than faith reasons.

The school, which opened as a free school in September 2013, has been the subject of a bitter dispute over where it should be sited.

Local campaigners argue that there is no need for a new school in the area and that the village lacks the infrastructure to cope with a large school. It is thought the majority of pupils attending the school will be bussed in from surrounding areas with higher proportions of Sikhs.

An application for the Khalsa Secondary Academy to stay at its Stoke Poges location beyond its current one-year agreement, which runs out in July, was rejected by South Bucks District Council in January. The Department for Education, which purchased the former office block and surrounding land for a reputed £4.5m, has now posted a new application with the Council.

Trevor Egleton, District Councillor for South Bucks, commented: "This application has been a travesty from the very beginning. The Department for Education have acted like the worst developer in the world, with every single aspect of what they are proposing in contravention of several national and local planning policies."

Parents that have been allocated places at the school have 20 school days from the notification date to submit their admissions appeals.