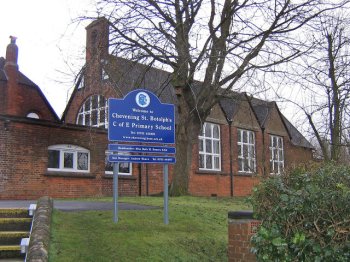 A Church of England school near Sevenoaks, Kent has refused an appeal by the local parish council to end discrimination against non-churchgoers.

In a letter to the Chair of Governors at Chevening CE Primary School, Howard Dilley, chair of Chevening Parish Council, called on the school to reverse the discriminatory element of its admissions policy in order to create a "more cohesive community" in the parish.

The letter followed concern amongst local residents that children were unable to attend their local school.

The school's admissions currently prioritise children of regular attendees of the local St Botolph's Church and other Christian churches, above other children who live near to the school.

Chairman of governors, the Reverend Chris Smith, defended their decision not to reverse the admissions policy, saying: "Most years anyone from the village who wants their child to come to Chevening School will succeed".

Rev Smith also stressed that the school regarded itself as a "church school" over and above being a "village school". He said prioritising 'distance' above 'children from other churches' would affect the school's ability to market itself as a faith school.

"The school's church ethos is not only at the core of what the school is but it is also what distinguishes us from other schools and attracts many families", said Rev Smith.

Rev Smith also questioned whether local families really wanted to attend the school, pointing out that a large majority (77%) of parish families did not choose to send their children to the school.

Responding to the refusal to change the policy Mr Dilley suggested that the school drop 'Chevening' from the school name to make clear that it was primarily a church school rather than a village school and integral part of the community.

In 2013 Archbishop of Canterbury, Justin Welby, said: "We are seeing a deeper and deeper commitment to the common good" at church schools, which he said were "moving away from faith-based entry tests." His comments were quickly reversed in a statement from Lambeth Palace in which he said: "I fully support the current policy for schools to set their own admissions criteria, including the criterion of faith."

Stephen Evans, campaigns manager at the National Secular Society, said: "For some parents the local school will be the most appropriate school for their needs. It is unjustifiable that any publicly funded schools are permitted to discriminate against children simply on the basis of their parents not attending church. Discrimination on grounds of religion and belief should be as unlawful in our education system as it is in all other areas of life."