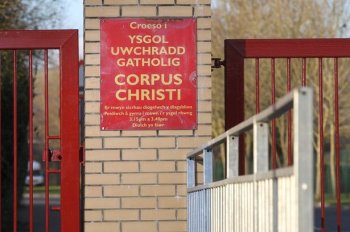 A Catholic 'faith school' in Wales has withdrawn a job offer from a potential new headteacher because he failed to live up to their idea of Catholic morality, citing an unspecified issue surrounding his marital status.

Christopher Belli was offered the job at Corpus Christi RC High School in Lisvane, Cardiff, in February. But the offer has now been withdrawn by school governors who are legally permitted to appoint only practising Catholics to senior positions and demand that they abide by 'Catholic morality' even in their out-of-school lives.

Kath Brown, chair of governors at Corpus Christi, is reported at Wales Online as saying: "due to the marital position of Mr (Christopher) Belli" the school had decided "that it is not appropriate for him to assume the headteacher post".

An acting head and deputy head will be put in place for the next academic year, starting in September.

Anne Robertson, schools director for the Archdiocese of Cardiff, said developments at Corpus Christi were "relatively unusual" – but not unprecedented.

"There have been issues before and things change in personal circumstances for all sorts of reasons," she said.

Faith schools in England and Wales are granted exemptions from equality legislation allowing them to apply a religious test in appointing, remunerating and promoting teachers. Teachers in such schools can be disciplined or dismissed for conduct which is 'incompatible with the precepts of the school's religion.

Terry Sanderson, President of the National Secular Society, said: "It is disgraceful that state schools are permitted to use public money to enforce this kind of religious correctness. Apparently there had been a long, drawn out selection process before Mr Belli was offered the job.

"Unless there is something illegal about his marital situation, there can be absolutely no excuse for withdrawing a job offer from him if he had been adjudged the best candidate for the role."

Mr Sanderson said that this kind of legally sanctioned discrimination made a mockery of equality laws. "If this happened to Mr Belli in a community school he would have strong grounds for a legal challenge. But because it is in a 'faith school' he has no protection at all."

Following complaints submitted by both the National Secular Society and British Humanist Association, the European Commission is currently investigating whether the level of discrimination permitted in 'faith schools' against non-religious teachers and those not of the faith of the school goes beyond that which is permitted by European Directive 2000/78/EC, which establishes a general framework for equal treatment in employment and occupation.