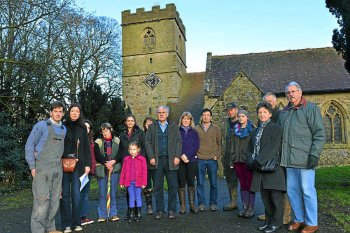 A parochial church council (PCC) that used an ancient law to make homeowners financially liable for repairs to their local church has withdrawn its claim.

Villagers in Stottesdon, near Kidderminster, reacted with dismay when they received notices from the Land Registry informing them claims against their properties had been made by their local church.

The PCC has now backtracked following a local campaign which threatened to boycott the Church. A statement issued by the Diocese of Hereford, stated:

"This PCC has listened to the concerns of parishioners and discussed at length the issue of Chancel Repair Liability. Following careful review and consideration of all material facts the PCC now wishes to withdraw the unilateral notices and the cautions against first registrations lodged with The Land Registry."

Commenting on the decision to withdraw the claims, Colin Resch, the vicar of St Mary's Church, said: "The consequences of Chancel Repair Liability in our parish have made it very difficult for us to carry out our prime objective of sharing God's love within our community."

The diocesan press statement, entitled, "Church decision brings hope to divided village", omitted to mention that it was the actions of the PCC that caused the resentment in the first place.

The removal of the registrations means that when houses are sold on the repair liability will not transfer with the ownership, and new householders will not have to pay it. Until that time, the properties are still potentially subject to CLR.

Elaine Hesssion, who set up the local campaign with her partner Jonathan Hill, welcomed the U-turn. She said: "The decision to withdraw Chancel Repair Liability Notices registered against properties in Stottesdon was the morally right one and very good news to the community. Whilst this is certainly a step in the right direction the legal position is that the current PCC or a future PCC can re-register these Notices at any time and then we are back to square one. Those property owners affected would like a deed of relinquishment from the PCC stating that they will never pursue us for chancel repair liability and hopefully this will restore the value to our properties. Maybe then we can all put this behind us and unite once more as a community."

The withdrawal of the registrations was also welcomed by the National Secular Society (NSS), which is campaigning for Chancel Repair Liability to be abolished.

Keith Porteous Wood, executive director of the NSS, said. "We acknowledge the contribution to our heritage of ancient churches, but it is completely unfair that money for repairing them can be demanded from property owners simply because of what the Law Commission describes as "anomalous, uncertain and obscure" law.

"Chancel Repair Liabilities have caused a substantial reduction in value and even saleability of the properties registered. Until the law is abolished the Church needs to try much harder to permit property owners to buy out their liabilities at affordable rates."

The law of Chancel Repair Liability dates back to the time of Henry VIII but had been little exercised for centuries until, in 2009, Adrian and Gail Wallbank were forced to sell their home after losing a protracted legal battle over a demand for almost £100,000 to fund repairs of their local medieval church at Aston Cantlow in Warwickshire.

Following the Wallbanks' case, the Government introduced a registration procedure enabling CRL to be shown on Land Registry documents. Around 12,000 registrations have been made by 250 parishes. Another 5,000 parishes that are eligible to do so, have not registered any claims. Further properties are potentially subject to CRL, despite being not being registered.

Since the Wallbanks' case, many vendors have taken out insurance against purchasers' future liability. The option of relatively inexpensive insurance is not open to owners of properties that have been registered – many of which were purchased before the Wallbank case, without CLR appearing on the deeds.

The campaign group set up my Elaine Hession can be contacted via Facebook.