Secularist of the Year awarded to Turkish MP, Safak Pavey 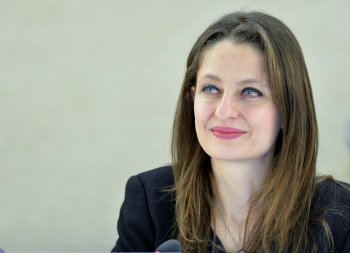 Turkish MP and human rights campaigner, Safak Pavey, has won this year's award for Secularist of the Year.

She was presented with the £5,000 Irwin Prize by honorary associate and shadow foreign office minister, Kerry McCarthy MP, at a lunch-time event hosted by the National Secular Society on Saturday.

Safak Pavey is a member of Turkey's main opposition party and sits for the Istanbul constituency. She is known for her international work in human rights, the promotion of the rights of women and minorities in Turkey, as well as humanitarian aid and peace-building.

She was also the first disabled woman elected to the Turkish parliament and, in 2012, was awarded a Woman of Courage Award by the White House for her efforts to raise awareness of the plight of those with disabilities in countries where resources are limited.

Safak has spoken out about the need for secularism in Turkey, a country where there are religious tests for civil servants and job applicants, no evolution on school syllabuses, segregation by gender in schools and universities, and 90,000 mosques being used as propaganda centres for the government. She has also worked for an improvement in the protection of the rights of women, against a backdrop of one out of three marriages involving child brides, honour killings having increased 14 times in the past seven years and a Prime Minister, Recep Tayyip Erdogan, who has said that he does not think men and women are equal. Freedom of expression is another deeply threatened right in Turkey, where youtube and twitter were banned in the midst of a corruption scandal involving high government officials, and where infamously last year, pianist and composer Fazil Say was handed a suspended 10-month prison sentence for "insulting Islam". Turkey ranks 154th amongst 180 countries on the World Press Freedom Index.

Terry Sanderson, president of the National Secular Society, said: "Safak Pavey is an extraordinary woman right at the centre of an enormous upheaval in Middle Eastern politics. After receiving her award she rushed back to Turkey for the regional elections that are taking place this weekend. These elections will be a significant indicator of which way the mood of Turkey is turning.

"Prime Minister Erdogan is showing a worrying authoritarian streak and recently tried to deflect criticism by attempting to ban Twitter. He has closed down TV channels that are critical of him and has jailed more journalists than anyone else in the world. He is leading his country inexorably towards becoming an Islamic state, putting in peril the secular constitution initiated by Kemal Ataturk in 1921.

"But not only is Safak at the centre of this titanic struggle between secularism and authoritarian religion, she is always looking to the rights and needs of others.

We are very proud to be able to honour her with this award."

Also honoured at the award ceremony were two nominees, Chris Moos and Abhishek Phadnis, both students from the London School of Economics who have, in the past year, challenged their own university and Universities UK over important and fundamental issues such as free speech and gender segregation.