IHEU defends freedom of thought for all at the UN 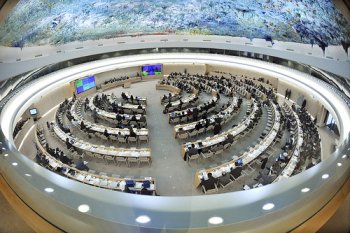 The International Humanist and Ethical Union (IHEU) has spoken out at the Human Rights Council (HRC) to defend freedom of thought for all – including the non-religious.

Addressing the UNHRC, Elizabeth O'Casey, IHEU's new head of delegation at Geneva, explained the importance of this language and urged the UN to discuss and promote this human right in its full, inclusive sense.

The statement drew on IHEU's written submission to the council, "The denial of the right to free thought for those with no religion", which in turn makes reference to the IHEU Freedom of Thought report.

IHEU (of which the National Secular Society is a member) is taking part at the United Nations Human Rights Council's 25th Session as an NGO representing humanists' broad human rights concerns with particular focus on secularism, humanist values and the rights of the non-religious.

The speech can be read in full below:

The right to freedom of thought, conscience, religion or belief for every human being is protected by Articles 18 of the ICCPR and UDHR.

The right to free thought is the precursor and progenitor of other fundamental freedoms. It is a complete and unlimited right, and should be protected unconditionally.

As the Special Rapporteur notes in his fine report, freedom of religion or belief applies to a broad variety of beliefs, not just those of predefined "classical" religions. Despite this, the right to free thought of those with no religion is, by many, either forgotten or knowingly violated. Currently, 19 states punish "apostasy"; some with the potential penalty of death. Other states ban atheists from holding public office, prohibit them from identifying as atheists, or force them to subscribe to religion to gain citizenship.

In his report, the Special Rapporteur talks of "religious hatred". Quite plainly Mr President, hatred against the non-religious is present globally also. We urge the Council to recognise this fact by incorporating language that expressly acknowledges hatred against non-believers in its reports or resolutions on the issue.

The language used by the UN has fundamental significance, in its descriptive and prescriptive capacity, and in its power to influence international discourse. We urge the Special Rapporteur and Council to bear this in mind when considering the discrimination and persecution suffered by so many non-believers globally.