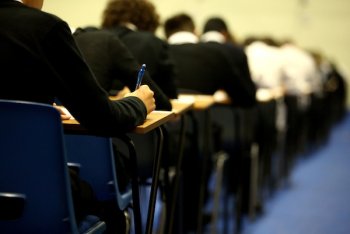 The National Secular Society has accused the Government of neglecting the best interests of children after it refused to intervene following revelations that some faith schools have been blacking out questions on exam papers, depriving pupils of the ability to score the maximum marks.

Responding to a parliamentary question from Lib Dem peer Lord Avebury, the Conservative education minister Lord Nash said: "This is a matter for Ofqual".

Responding to a further question which asked the Government what representations they had made to the Children's Commissioner regarding the right of pupils to see all questions in exams they are taking, Lord Nash confirmed: "Neither Ofqual, the independent exams regulator, nor the Department for Education, have made any representations to the Children's Commissioner."

The redaction by teachers of exam questions in science papers deemed by schools to be incompatible with their religious character was exposed by the National Secular Society last year after it obtained evidence of the practice at Yesodey Hatorah Jewish Voluntary Aided Girls' School in London.

The exam board concerned, Oxford Cambridge and RSA (OCR), admitted to the NSS that because of the blacking out of questions at Yesodey Hatorah, pupils were denied the possibility of receiving full marks in their GCSE science papers. Pupils were unable to access 3 marks out of 75 for a unit in a higher GCSE science exam, and 1 mark out of 75 for a unit on a lower paper.

A more recent freedom of information request made by the NSS to Ofqual disclosed that the practice was more widespread than this example. It also revealed that OCR proposes to permit faith schools to redact questions they don't approve of, provided that it is done in collaboration with the exam board. The Department for Education describes this as a "proportionate and reasonable response".

It has since emerged that exam boards have met with the Board of Deputies of British Jews to discuss issues relating to religious sensitivities around examination questions. According to the Board of Deputies': "It was agreed that the panel would continue to advise the exam board through vetting texts and facilitating choice around coursework and exams to ensure that cultural sensibilities of religious groups are fully met."

The National Secular Society called the Department for Education's failure to condemn the censorship of formal exam questions "deeply lamentable".

Stephen Evans, NSS campaigns manager, said: "Redacting questions on exam papers fails pupils by denying them vital marks, but the broader concern is that this attitude extends to science classes, where children and young people are being deprived of vital scientific knowledge. Both represent the intellectual betrayal of children who are entitled to such information.

"There is also a concern that children and adolescents' sexual and reproductive health rights are being impeded by the refusal to teach such key areas of the National Curriculum as human reproduction."

In addition to making representations to Ofqual, the National Secular Society has written to the Children's Commissioner calling on her to investigate pupils being disadvantaged by being shielded from key scientific principles and denied the right to achieve the best results that they can in examinations.