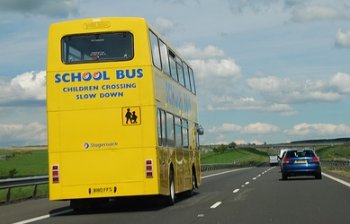 Councillors at Derbyshire County Council have approved a proposal to cut free transport for pupils travelling to religious schools.

The Council's cabinet said it took the decision because of an urgent need to save over £157 million over the next four years.

It said that providing transport to schools preferred on grounds of religion was a discretionary service and now simply not affordable. The change will save the authority an estimated £760,000 over two years. The council will continue to abide by its statutory responsibilities to those on low incomes.

The Council agreed to continue subsidising pupils in key school years until July 2016 so as not to disrupt their education at a crucial point. It will also establish a £100,000 "hardship fund" to help families hardest hit by the change.

But families of pupils who started at their school after September 2011 will have to pay – currently £316 for primary and £349 for secondary age pupils.

In Northumberland, the County Council is also consulting on changes to school transport, which would no longer privilege religious schools. It could save the council £870,000 a year and would, if the proposals are approved, begin in September 2015. You can take part in the consultation here.

Meanwhile, in Bradford the council is continuing with its consultation on plans to cut transport to religious schools, but the change seems inevitable.

The authority is under mounting pressure from religious groups who are claiming that withdrawing this very expensive privilege amounts to "discrimination" against them.

One Catholic school has presented the council with a petition signed by 335 people demanding a u-turn. They say that hard-pressed families will need to find up to £400 to send their children long distances to attend a "faith school".

Previously, pupils who lived more than two miles from their nearest faith school were entitled to free transport to and from the school.

Caroline Hyde, chairman of Bishop Wheeler Catholic Academy Trust, told the Telegraph & Argus: "This is an attack on faith schools; by discriminating against one faith group you discriminate against all. Bradford has a proud reputation of multiculturalism and being inclusive. As with other faiths in our city, we hope you show us some understanding and allow Catholic children to be treated the same as all others in Bradford."

Councillor Ralph Berry, head of children's services on the Council's executive, said: "The implementation of some of these policies has to go through stages of consultation. Any cuts we have made have been with a heavy heart."

Terry Sanderson, President of the National Secular Society, said: "This is not discrimination against Catholics; it is an end to discrimination against all other parents who have had to pay for any transport involved in their children's education over the decades that Catholic parents have been receiving these enormous subsidies.

"The amount of money involved nationally in bussing children over long distances, day after day, in order for them to be educated by a religious organisation is mind-boggling. It is surely not the taxpayers' duty to facilitate this.

"As councils struggle to balance the books – and with the Government warning us that the cuts have only just begun – it is selfish and self-serving for the Catholic Church to object to this. As services for the elderly and disabled are relentlessly reduced, the religious interests that demand this discretionary money from hard-pressed council coffers should be ashamed of themselves."